Amazon.com (NASDAQ:AMZN) is partnering with prefabricated homebuilder Plant Prefab to design houses that incorporate Alexa-enabled devices and other Amazon smart-home technology into the very walls of the house. It's not so much that Amazon wants to build your home as control its connectivity.

Amazon, Alphabet's Google, and Apple are engaged in a battle for smart speaker supremacy. Amazon leads with a two-thirds share, as it has flooded the market with low-cost Echo and Echo Dot devices, but eMarketer expects Google to narrow the gap by 2020 with a 33% share, while other manufacturers will see their slice grow from 8% to 14%. 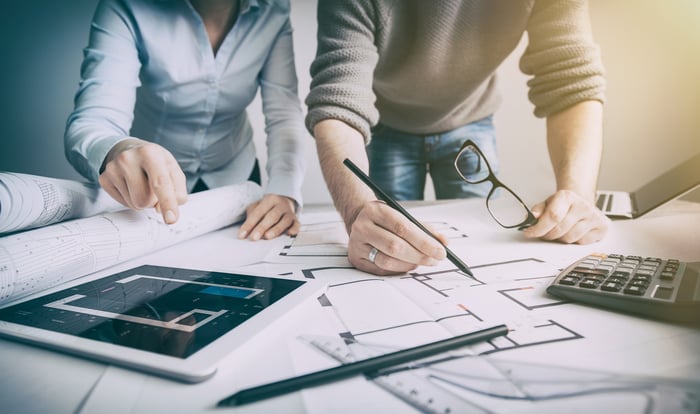 Amazon.com is having its Alexa voice assistant technology built into homes at time of construction. Image source: Getty Images.

Getting in at the ground floor

Amazon's venture capital arm, The Alexa Fund, participated in Plant Prefab's Series A funding round last month, which raised $6.7 million in capital. Series A financing is when a start-up first offers ownership to external investors and receives its first round of funding from venture capital firms. The money raised will go toward hiring new senior personnel, building out the company's marketing and sales team, and developing Plant Prefab's patented Plant Building System.

In a release announcing the investment, Alexa Fund Director Paul Bernard said, "Voice has emerged as a delightful technology in the home, and there are now more than 20,000 Alexa-compatible smart home devices from 3,500 different brands. ... We're thrilled to support them as they make sustainable, connected homes more accessible to customers and developers." Alexa Fund can provide as much as $100 million in venture capital funding to help propel voice technology innovation.

The investment follows Amazon recently unveiling a portfolio of new products for the connected home, including new audio devices, connectivity for the automobile, and a new smart doorbell. It also comes after the company partnered with Lennar (NYSE:LEN) to have the Alexa voice assistant technology built into all the builder's new homes. Each house will come with an Echo Show and an Echo Dot, and homebuyers will get a free visit from an Amazon technician to help set everything up and teach them how to use it. They are constructing eight model homes across the country featuring the built-in technology.

Plant Prefab says it is the first home factory in the nation that is focused on sustainable practices, including construction, materials, processes, and operations. It claims it can reduce construction time by 50% and cost by 10% to 25% in major cities. The company has installed 26 units in California and Utah as well as a multifamily project in Berkeley.

By having homebuilders incorporate Amazon's voice assistant technology into the bones of a house, it lays the groundwork that will allow homeowners to use Alexa to buy everything but the four walls around their home.