Advanced Micro Devices (NASDAQ:AMD) and Intel (NASDAQ:INTC) have been heated rivals for years, but the stakes are higher now. Although the PC market has started to show signs of life after years of decline in unit shipments, both of these central processing unit (CPU) makers are eyeing the huge opportunity to supply chips for the booming data-center market.

Let's take a look at where AMD and Intel stand to determine which is the better buy for investors today.

AMD believes it has victory in its grasp

AMD's stock has soared 1,400% over the past three years as CEO Lisa Su has brought a new sense of urgency to the once-struggling chipmaker. AMD has been winning in every market: client CPUs, server CPUs, and GPUs for data centers and gamers.

The company has made a regular habit of beating expectations lately, and the second quarter was no exception. Revenue soared 53% year over year driven by strong demand for Radeon graphics cards, as well as Ryzen CPUs for PCs and EPYC processors for data centers. Improved sales helped AMD report its highest quarterly profit in seven years.

While AMD's Ryzen CPUs have been chipping away at Intel's lead in the PC market, everyone has their eye on the server market -- a market that Intel has dominated with 99% market share. Over the last year, Intel generated $21.2 billion (or 30% of total revenue) from its data center group, which includes sales of its Xeon processors for servers. This is a massive and fast-growing market, which is why investors are so bullish on AMD as it gains traction. Intel has faced significant delays in ramping up its 10-nanometer server chip, which has opened the door for customers to adopt AMD's EPYC processor.

It was estimated that AMD's share of the server market reached 1.3% during the second quarter, and a Goldman Sachs analyst believes the company will reach a mid-single-digit share by the end of the year. Aiding AMD in this win has been its claim that its EPYC server chip performs better than Intel's Xeon server chip. In the second quarter, shipments of EPYC processors increased more than 50% over the first quarter, which shows how fast AMD's server business is beginning to ramp up.

What's more, while Intel might not launch its 10-nanometer server chip until the end of 2019, AMD is on schedule to launch its 7-nanometer chip by sometime next year. This means AMD could actually beat Intel to market with faster, more energy-efficient processors, which would only fan the flames of AMD's red-hot momentum.

Meanwhile, AMD has also been scoring big in the discrete GPU market against NVIDIA. AMD's computing and graphics segment is its largest segment, making up 61% of total revenue last quarter and growing 64% year over year. However, NVIDIA just launched its Turing RTX graphics cards, which might put a halt to AMD's comeback in the GPU market for now.

AMD has been firing on all cylinders and this is reflected in its high forward P/E of 42. The company will have to maintain high growth rates to justify that valuation. This is easier said than done, as things can always go wrong when you're competing against deep-pocket rivals like NVIDIA and Intel. 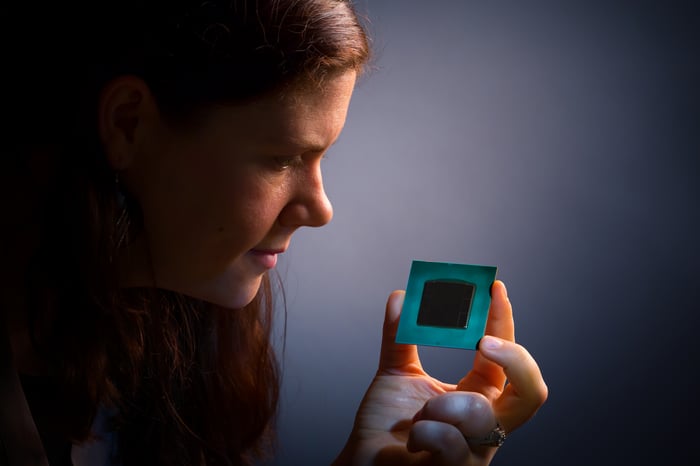 Even with AMD nipping at its heels, Intel shares are still up 27% over the last year. But the shares have been treading water in recent months as concerns over Intel's production delays have clouded the short-term picture. Intel's forward P/E is just 11.3.

Although Intel is not growing as fast as AMD, the chip giant has been turning in robust growth rates in its data-centric segments. Revenue grew 15% in the second quarter, driven by a 27% surge in its data center group. Its PC-based revenue was up a respectable 6% year over year. Higher selling prices for high-performance products in data center and client businesses, in addition to share buybacks and a lower tax rate, contributed to a 44% growth rate in non-GAAP earnings per share. These are great numbers for a large company that generated $66 billion in trailing-12-month revenue.

Keep in mind that an all-out assault by AMD on Intel is nothing new. Intel has dealt with competition from AMD for years and has always come out on top. Intel has vast resources to invest in product development. The company spends about $5 billion quarterly on research and development, which includes tuck-in acquisitions. That's nearly as much revenue as AMD generates in a year.

Intel's PC-centric business has struggled over the last six years with a slowing PC market. But Intel has been shifting its investments to areas that management expects to drive future growth, such as artificial intelligence, autonomous driving, and product leadership. The $14.5 billion acquisition of Mobileye last year makes Intel one of the top players in the self-driving car industry.

While some analysts (and investors) are sour on the stock now, the consensus analyst estimate still expects Intel to grow earnings about 10% per year over the next five years, which means many analysts expect the chip giant to overcome its current battle with AMD as it has in the past.

AMD is certainly headed in a positive direction. It's growing a lot faster than Intel, but investors have to pay up for that growth. AMD will likely continue to gain share on Intel in the server market in the short term, but it's difficult to know how much share it will gain and how much of that growth is already factored into the stock's current valuation.

As for Intel, there's no guesswork involved. The stock is cheap, which means if Intel can get past near-term obstacles, the stock should eventually move higher. The company's investments in AI and driverless-car systems are very promising. Intel is also positioned well in the flash memory market and the Internet of Things -- both of which factor into Intel's self-driving car plans, as my Motley Fool colleague Ashraf Eassa has discussed. Altogether, management pegs its total addressable market across its segments at $260 billion, or about four times its current level of revenue.

Intel is a sound choice for investors who want growth but don't want to pay a high valuation. The chip giant will remain a giant. I believe Intel is the better buy.