Shares of Advanced Micro Devices (NASDAQ:AMD) have been on fire over the past few months. The stock is up more than 175% since April 1, with investors betting that the chip company's new products will win market share from rivals Intel (NASDAQ:INTC) and NVIDIA (NASDAQ:NVDA). Shares of AMD currently trade for around $28.

Some analysts are betting that the stock's epic run isn't over. Bank of America Merrill Lynch is the most bullish on the company's prospects, boosting its target to $35 per share. The valuation "is compelling relative to the growth opportunity," BofA analyst Vivek Arya said in a note earlier this week, as reported by CNBC.

Others aren't so sure. Analysts at Arete believe that the bullish view on AMD is overly optimistic. Arete already had a negative rating on the stock, but now it views the high-flying chip company as its "best short idea." That title comes with a price target of just $15. 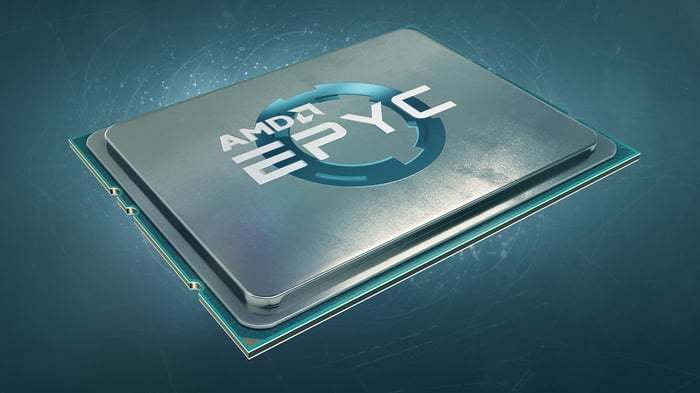 Let's start with what is unequivocally true: AMD is now competitive in its core markets after years of struggling mightily. In the PC CPU market, the company's Ryzen chips are leaps and bounds ahead of its last-gen products. The second iteration of Ryzen, launched earlier this year, put Intel on notice. While AMD still falls short of Intel in terms of single-threaded performance, aggressive pricing and high core counts help offset that weakness.

In the server CPU market, AMD is aiming to become a major player once again with its EPYC chips. Prior to EPYC, AMD's market share rounded down to zero. The company expects to end the year with a mid-single-digit market share, and analysts at Jefferies expect a 12% share by 2019 driven in part by Intel's ongoing issues with its 10nm manufacturing process.

Intel dominates the server CPU market, and it makes a fortune doing so. The company has faced no real competition for years, and the operating margin in its data center segment flirts with 50%. During the second quarter, Intel generated $5.55 billion of revenue and $2.74 billion of operating income from its data center segment. Even a small piece of that business could do wonders for AMD's bottom line.

In the GPU market, AMD isn't in as strong of a position. Its Vega high-end GPUs launched last year were playing catchup with NVIDIA's older products, and now the company will need to contend with NVIDIA's latest Turing-based GPUs announced last month. Demand from cryptocurrency miners has buoyed AMD's graphics business until now, but market share will need to be won from the gaming and data center markets going forward. However, NVIDIA's sky-high pricing for its new cards opens a window for AMD to pick up share.

In a nutshell, the AMD bull argument goes like this: The company is going to win a bunch of market share from Intel, and perhaps some from NVIDIA, which will cause revenue and earnings to explode.

While AMD will almost certainly win market share, the question is: How much? Intel won't take kindly to losing lucrative data center sales to AMD, and NVIDIA will do what it needs to do to protect its leading position.

AMD's valuation has already reached a point where lofty market share gains are baked in. At $28, the stock trades for around 60 times the average analyst estimate for full-year adjusted earnings, and 37 times AMD's outlook for 2020 adjusted earnings. It needs to hit those targets and then some to justify the current stock price.

And even if AMD wins a vast amount of market share, the company is unlikely to enjoy the same profitability as Intel has enjoyed in the past few years. Particularly in the data center market, where Intel has faced no real competition, the market leader has been able to charge essentially whatever it wants for its chips. Those days are now over, and competition should push down prices and margins.

The bear view on AMD: The stock already prices in an optimistic scenario that's far from a sure thing.

AMD has certainly outperformed my expectations over the past couple of years, staging a comeback for the ages. The company may continue to surprise, with earnings eventually justifying a stock price even higher than today's.

But there's a lot that could go wrong as well. For one, a collapse in cryptocurrency-related demand led AMD to guide for just 7% year-over-year revenue growth in the third quarter. The growth rate will need to pick back up to justify the sky-high valuation, and that requires market share gains from two companies loath to cede any ground.

Given the run AMD has had, I would err on the side of caution. The expectations built into the stock price are optimistic, and a lot will need to go right just to keep the soaring stock afloat.