For years, chip-giant Intel ( INTC -1.56% ) has been trying to diversify its business beyond the stagnant personal computer market. The company's main source of diversification has been the market for data center processors, but Intel also has bet heavily on trying to become a leader in the blossoming Internet of Things market.

Intel's Internet of Things business segment, which sells processors and other components into a wide range of market segments such as automotive, retail, and industrial, generated $3.17 billion in revenue in 2017 -- up about 20% year over year. It's a successful business. 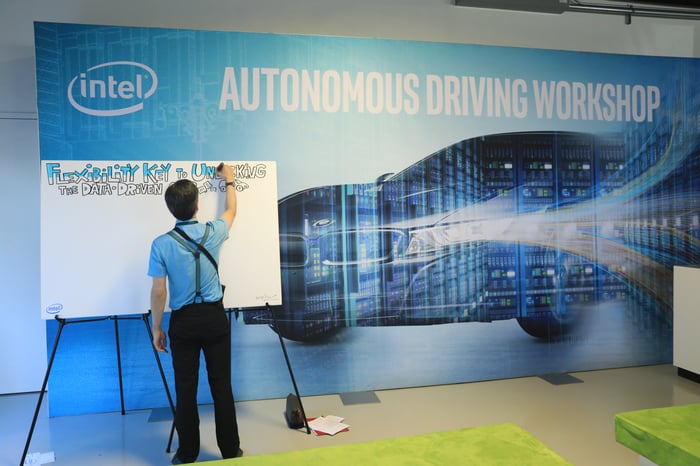 One way that Intel hopes to continue to build upon that success is by positioning itself to be one of the leading vendors of the chip technology inside of increasingly autonomous vehicles. Let's take a look at Intel's strategy to try to become a leader in self-driving cars.

Intel's strategy to capitalize on the self-driving car market is actually quite broad. Last year, Intel purchased Mobileye, a company that Intel described as the "leader in computer vision systems for ADAS and autonomous driving."

The company's plan is to be able to offer car makers complete platforms that combine Mobileye's computer vision chips with Intel's processors and connectivity products. As Intel describes it, Mobileye's technology allows self-driving cars to "see the world," while Intel's processor technology allows self-driving cars to "plot the path" -- in other words, perform the many complex calculations required for the car to act on what the Mobileye technology "sees."

On top of that, self-driving cars are going to increasingly rely on wireless-communication technology to both receive and transmit data. Fortunately, Intel already has a substantial portfolio of wireless-connectivity technologies including LTE and soon, 5G cellular modems, as well as Wi-Fi/Bluetooth combination chips.

Finally, self-driving cars are going to require substantial amounts of fast, reliable storage. That storage is likely to be based on NAND flash, a technology that Intel currently offers (and is quite bullish about).

It's not hard to see why Intel's self-driving car strategy has a ton of potential. Intel can offer car makers a substantial portion of their silicon needs thanks to its broad portfolio of technologies. On top of that, since self-driving cars will almost certainly require very high-performance processors and technologies, Intel's revenue from selling processors and other technologies into such cars could come at quite robust gross profit margins.

Points on the back end

In Intel's presentations around its self-driving car strategy, the company's vision isn't just limited to the components and technologies that it can sell into such cars, but it also extends to how the company can profit from the technology ecosystem required to support self-driving cars.

Intel's second-largest business and its main growth driver is its data center group, which sells processors and other technologies into data centers. Intel executives have routinely talked about the substantial amount of data that widespread proliferation of self-driving cars would generate and the substantial computing power that'd be required to process and make sense of that data.

It's not hard to be excited about the potential here. If a self-driving car revolution happens and leads to a meaningful increase in the number of data centers that get built to support a large and growing number of self-driving cars on the road, this could actually help fuel Intel's data center group business, as well.

Investors should keep a close eye on both broader industry progress with respect to self-driving cars, as well as Intel's efforts here. If self-driving cars, in general, really take off, then Intel will be in a strong position to capitalize on the growth in that market. This could lead to stunning levels of growth in its Internet of Things business group in the years ahead, with its data center business benefiting, too.