It's hard to keep up with Amazon's (NASDAQ:AMZN) never-ending quest to disrupt retail. It bought Whole Foods Market, opened physical bookstores, plans to swamp the country with 3,000 automated convenience stores, and even partnered with Good Housekeeping for a pop-up store with no inventory where you purchase everything online via QR codes.

Now Amazon has set its sights on a new retail concept that sells only merchandise rated four stars or better on its online marketplace, with two-tier prices: one for Prime members and another, higher price for non-members. 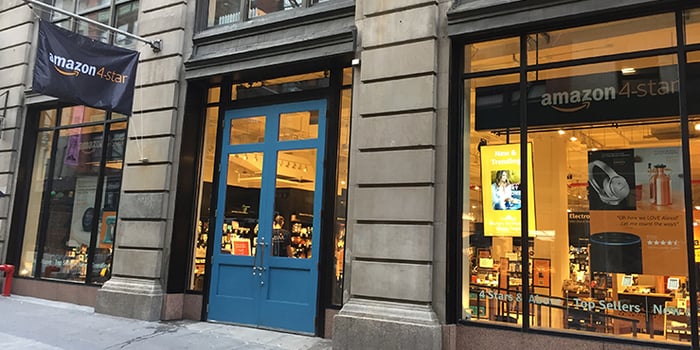 Despite the growth of e-commerce, that channel only represents about 10% of all retail sales made in the country. While Amazon and other online-only shops have taken their toll on traditional brick-and-mortar businesses, it's become apparent that a mix of shopping experiences is optimal. And no one might be playing that game harder than Amazon.

The company is continuously experimenting with all of the information it has collected on customers' shopping habits over the years. The new store, opening in the SoHo area of New York City, is called Amazon 4-star and will feature only products that are popular and highly rated by fellow New Yorkers. Anyone can shop there, and you can become a Prime member on the spot to get the discounted pricing with a 30-day free trial.

By stocking shelves with items that are in demand by customers from the area where the store is located, Amazon can replicate this concept time and again across the country. What's popular in New York might not be in Los Angeles, let alone Des Moines.

Since its purchase of Whole Foods, Amazon has increasingly blended the online experience with the supermarket's physical locations. By making the grocer's 365 by Whole Foods merchandise available on Amazon's grocery site, and by extending Prime discounts to customers who shop at Whole Foods stores, Amazon has blurred the lines between brick-and-mortar and online.

It might be the epitome of irony that Amazon would also open a bookstore, since it got its start as an online bookseller. And it just opened an experimental store at the Mall of America in Bloomington, Minnesota, where customers shop Good Housekeeping's selection of merchandise, scan a QR code with the Amazon app, and have their orders shipped to them.

A different version of that experience is the Amazon Go store, where you grab the grocery items you want and walk out. Using an array of cameras and sensors that line store shelves, the app will charge your Amazon account for the purchase without you going anywhere near a register.

Giving you what you want

Amazon 4-star starts with merchandise that customers in SoHo have already purchased and rate highly. It then adds new and trending items to fill out the selection with products from the most popular categories on its site, including its devices, consumer electronics, items for the kitchen and the rest of the home, toys, books, and games. You get to test all of them in the store, and digital price tags dynamically update the online price of a product.

This concept is not so much a new direction for retail (plenty of stores curate their merchandise), but it gives Amazon more opportunities to learn about consumer behavior in a physical-store format, data it can use across all of its brick-and-mortar locations.

Yet Amazon needs to be careful not to simply have a grab-bag selection of goods, even if they're highly rated, because it's a format that didn't work too well for Sharper Image or Brookstone. And the store doesn't seem especially large, so the product selection will need to be hyper-curated while still offering a broad choice. It's a careful balancing act.

Still, this latest foray into brick-and-mortar shows that while Amazon started as an online-only outfit, it fully understands the best way to retail success is through an omnichannel strategy.