Streaming video veteran Netflix (NASDAQ:NFLX) will publish results for the third quarter of 2018 after the closing bell on Tuesday, Oct. 16. Three months ago, the second-quarter report fell short of some key expectations, and the stock has been suffering ever since.

Here are the main things to keep an eye on in Netflix's upcoming business update.

Netflix's management hopes to add roughly 650,000 net new members in the U.S. during the third quarter alongside 4.4 million international additions for a grand total of 5 million net new subscribers. Hitting that target on the nose would give Netflix 58 million domestic members, up from 52.8 million in the year-ago period. Overseas subscribers would climb from 56.5 million to 77.1 million over the same period.

This is where Netflix fell short in the second quarter, guiding to 6.2 million global subscriber additions but only delivering 5.2 million. Management insists that these targets are the company's own best guess at where current trends are leading them, rather than hoped-for growth ambitions. As such, CEO Reed Hastings and CFO David Wells argue, investors should expect the real-world results to land below guidance as often as they exceed these official targets.

A steady stream of subscriber-addition surprises to the upside led to a mild panic when Netflix finally did release results below its guidance targets. Whether market makers have absorbed and accepted the win-some-and-lose-some premise yet, subscriber additions remain the most closely watched numbers in Netflix's quarterly reports -- including this one.

The company is burning a lot of cash these days, and there will be more dollar bills on that bonfire in the third quarter. Netflix consumed $559 million of free cash flows in the second quarter and expects the scheduled content-production plans to result in even faster cash burns in the second half of the year.

The long-term plan is to pay dearly for exclusive content now and reap the rewards of the resulting portfolio for many years to come. It's a radical shift from simply paying license fees to other companies for the rights to show movies and TV series made by someone else. Netflix remains years away from the turning point, though the rolling trend is starting to hold some promise. Any new hints on exactly when Netflix expects to start generating free cash flows instead of consuming them would be appreciated. 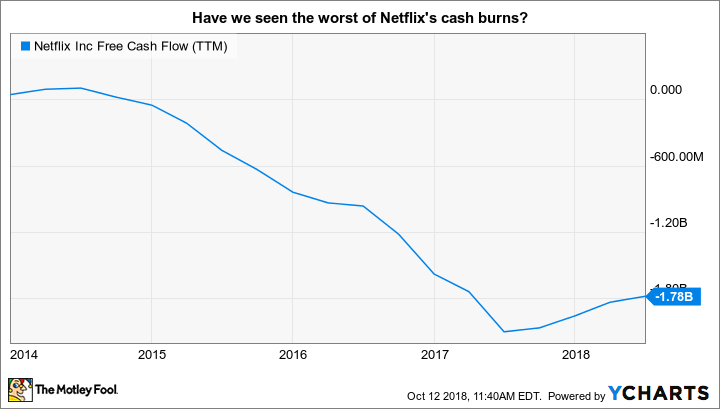 The streaming media market is teeming with fresh faces these days, and the new entries are often tied to very familiar business names. Everybody wants to grab their own exclusive slice of that pie -- before the fast-growing sector that Netflix helped create turns into a more mature industry with fewer and slower growth opportunities.

At the end of 2018, Netflix's multiyear streaming partnership with Walt Disney (NYSE:DIS) runs out and will be replaced by an in-house video platform from the House of Mouse, built around technology developed for Major League Baseball's live streaming of sporting events. Some of Disney's content will stick around, such as the Marvel Defenders portfolio that Disney created in direct partnership with Netflix. But the Pixar, Star Wars, and big-screen movies will stop flowing in Netflix's direction.

Walmart (NYSE:WMT) found a partner in MGM Studios to come up with original content for its struggling Vudu service. Starting with a serialized sequel to the 1983 comedy "Mr. Mom," Walmart hopes to grab the eyeballs and wallets of Middle America. Vudu isn't an exact apples-to-apples rival to Netflix since the megaretailer's service offers content for sale or rent instead of a monthly subscription model, but they do play in the same general sandbox.

The subscription-based market will soon see a familiar face making waves, too. AT&T (NYSE:T) will build a streaming service for its recently acquired Time Warner catalog, launching the as-yet-unnamed platform by the end of 2019. The telecom giant insists that this service won't replace the existing HBO Now service, but will incorporate some of HBO's content in order to address a larger audience. It would not be a surprise to see Time Warner's content dropping out of the Netflix catalog later on.

Netflix needs to address this growing collection of sector rivals. CEO Hastings has said that his company must compete for consumer attention with powerful alternatives such as video gaming or drinking wine. From that perspective, another video service or two might not be too terrifying. Investors still need to be assured that this company has a plan in place to deal with this increasingly fragmented market and the looming exit of popular content collections.