Over time, chip giant Intel (NASDAQ:INTC) has aimed to increase the amount of technologies that it integrates into its chips. That integration benefits Intel as it can increase the amount that it charges for those chips (since there's more technology inside), while also leading to lower overall costs for its customers.

One such technology is Wi-Fi and Bluetooth connectivity. The platform controller hub (PCH) chips that accompany many of Intel's latest notebook and desktop processors integrate a technology that the company refers to as CNVi, or "the integrated wireless IP portion of Intel processors." 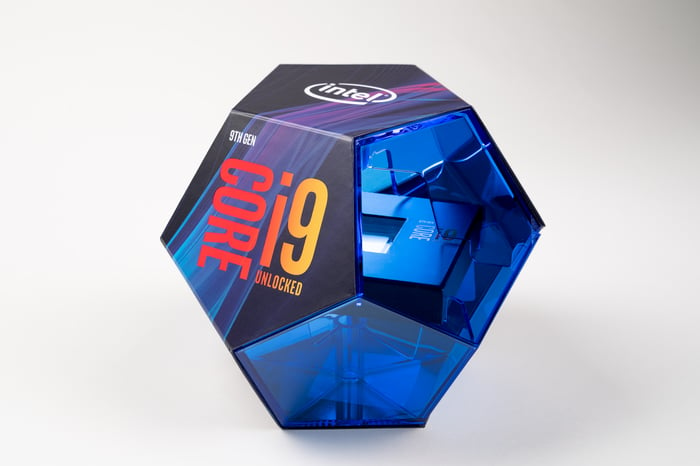 Additionally, Intel's latest Atom-based processors for the low-end desktop and notebook markets -- sold under the company's Celeron and Pentium brands -- also incorporate this CNVi technology right on the chip.

These chips still require a separate radio frequency, or RF, module to provide Wi-Fi and Bluetooth functionality -- modules that Intel offers -- but it seems that Intel's goal with respect to that integration is to encourage its partners to use Intel Wi-Fi instead of competing Wi-Fi products.

Here's some evidence that suggests that the company's plan is succeeding.

On Oct. 8, Intel announced its first 9th Gen Core processors, which are chips targeted at the gaming and PC enthusiast market. Alongside those processors, motherboard makers released new motherboards based on the company's Z390 PCH.

The Z390 PCH, unlike its predecessor, Z370, incorporates the CNVi technology.

I looked at the specifications of several of the Z390-based motherboards with Wi-Fi enabled that were announced as well as their Z370-based predecessors and noticed a distinct shift from third-party Wi-Fi chips to Intel-based Wi-Fi.

The high-end Z390-based Maximus XI Hero motherboard from major motherboard maker ASUS, according to the company's website, incorporates an Intel Wireless-AC 9560 module.  Its predecessor, on the other hand, used a Wi-Fi chip from Realtek.

The point, though, is that it would seem that thanks to the integration of key Wi-Fi components into Intel's PCH chips, the chip giant is gaining share in Wi-Fi on the PC.

Now, these are just a couple of examples of gaming/enthusiast-oriented motherboards moving from third-party Wi-Fi chips to Intel chips, but I would imagine that outside of the gaming market, Intel's integrated solution will be quite attractive to motherboard makers and system manufacturers (these sets of companies often intersect) for a broader portion of the PC market.

A potential windfall for Intel

Ultimately, to the extent that Intel can gain market segment share in the PC Wi-Fi market, its client computing group (CCG) revenues and profits should be set to benefit.

Intel's Wi-Fi chip sales (among other things) are incorporated in the "adjacency" portion of the company's CCG revenue. In 2017, so-called adjacency revenue within CCG was $2.78 billion. Those results have gotten a big boost over the years as its cellular modem sales have surged. In the coming quarters and even years ahead, PC Wi-Fi share gains could lead to additional growth in this subsegment of CCG.