Spirit Airlines (NYSE:SAVE) became an investor darling during its first few years as a public company. Between 2011 and 2014, big airlines like American Airlines (NASDAQ:AAL) and United Continental (NASDAQ:UAL) tried to increase fares as far as possible to offset high fuel costs and rising labor costs. This made it easy for Spirit to undercut the likes of American and United on price while still earning enviable margins.

As a result, Spirit Airlines stock surged to an all-time high of around $85 between 2011 and late 2014, but has lost nearly half of its value since then. Fortunately, the ultra-low-cost carrier appears to have stabilized its business at long last. 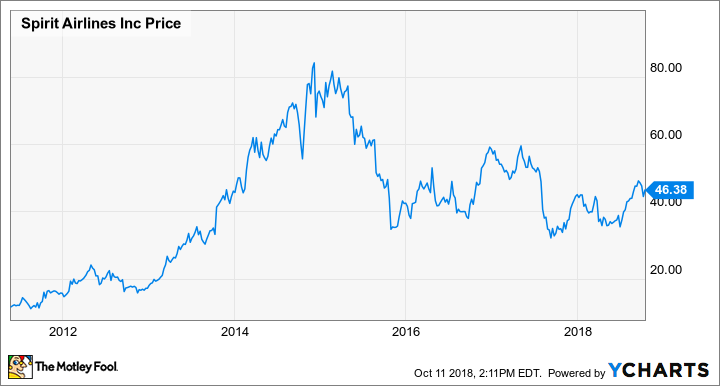 The situation was critical

For the past few years, unit revenue declines have been the norm at Spirit Airlines. Revenue per available seat mile (RASM) peaked in 2013 at 11.94 cents. However, RASM fell 1% in 2014 and the declines accelerated from there. By 2017, Spirit Airlines' RASM had plunged all the way to 8.95 cents.

As a result, Spirit Airlines' pre-tax margin was significantly lower in 2017 than it had been in 2013 and 2014, even though its average fuel price had fallen from around $3 per gallon to less than $2 per gallon over that period.

To make matters worse, RASM declined by another 4.6% in the first half of 2018, while fuel prices surged by more than 30%. This added to the margin pressure on Spirit Airlines, despite the carrier's strong non-fuel unit cost performance. In short, by midyear, Spirit urgently needed to get unit revenue growing again.

The long-awaited turnaround has begun

Spirit Airlines seemed to get back on track in the first half of 2017, as RASM rose 0.9%. Yet an industry fare war (instigated primarily by United Airlines) broke out over that summer, causing Spirit's unit revenue to start declining again. Three months ago, Spirit Airlines' management projected that RASM would rise 2% to 3% year over year in the third quarter. However, investors were understandably suspicious of this bullish forecast, in light of the carrier's experience last year.

Yet Spirit Airlines was actually able to surpass its unit revenue guidance. On Wednesday, the company published an investor update, revealing that RASM jumped about 5.5% last quarter. It attributed the strong performance to a combination of a favorable demand environment and the company's initiatives to shift capacity to better markets and boost fares where possible.

Meanwhile, Spirit is on track to hit its non-fuel unit cost guidance on the nose. Furthermore, while fuel prices were somewhat higher than planned, fuel efficiency came in a little better than management had expected.

The net result is that while Spirit Airlines' initial guidance implied a pre-tax margin decline of as much as 3 percentage points in the third quarter, the airline now seems likely to report an adjusted pre-tax margin in line with or slightly better than its Q3 2017 result of 15%.

Some investors may be concerned that Spirit Airlines' unit revenue trajectory could take a quick turn for the worse sometime in the next few quarters, just as it did last summer. However, the cost of jet fuel has jumped more than 50% since the last fare war broke out in July 2017. United Airlines and American Airlines both have thinner profit margins than Spirit, so they cannot risk sparking a fare war at this point.

Additionally, Spirit Airlines has been reorienting its route network, deploying more capacity in large leisure markets like Orlando and Las Vegas, rather than in legacy carrier hubs. This route strategy is steadily reducing the likelihood of another fare war, while helping to insulate Spirit from future pricing battles in any particular hub market.

Lastly, Spirit has been able to get non-ticket revenue growing again. This key revenue source -- which now accounts for almost half of the company's total revenue -- is less sensitive to industry supply and demand dynamics.

There will undoubtedly be fluctuations in Spirit Airlines' RASM growth going forward based on one-time events and differing year-over-year comparisons from quarter to quarter. However, the cheapest airline in the U.S. is finally back on track. This could pave the way for a big rally in Spirit Airlines stock over the next few years.