Media reports recently revealed that Alphabet's (NASDAQ:GOOG) (NASDAQ:GOOGL) Google Plus social media platform had a security bug that allowed some third-party developers to access users' profile data over the past three years. Google found out about the bug back in March, but never informed its users.

The time it took Google to find the bug and the fact that it wasn't keen on informing users is a black eye for Google at a time when users are becoming increasingly concerned about companies selling their data, let alone having it potentially siphoned off by third-party developers without their consent. Google has since shut down most of Google Plus, though businesses can still use the platform.

Facebook (NASDAQ:FB), for its part, experienced a significant data breach just weeks ago that allowed hackers to gain access to about 50 million of its users' accounts, sometimes enabling the hackers to lock legitimate users out of their own accounts. Facebook's reputation had already taken a hit earlier this year, following the news that data analysis firm Cambridge Analytica had gained access to 87 million Facebook users' data without their consent.

No tech company is immune from breaches or from third parties trying to gain access to user data, but there are differences in how companies respond to this issue. One such difference came into focus just last week, when both Facebook and Google released new smart-home devices for consumers. Google erred on the side of more privacy for its users, while Facebook is seemingly stripping more of it away. 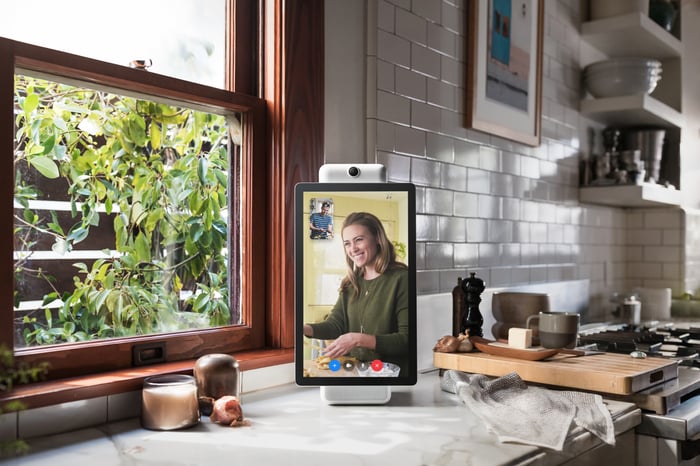 Google's new Home Hub is, essentially, the same device as its increasingly-popular Home smart speaker. The device comes with Google Assistant, which is able to field questions in ways only Google can and also acts as a mini command center for a user's Wi-Fi-connected light bulbs, speakers, and other smart-home products. What Home Hub has that the company's smart-home speakers don't have is a screen from which a user can control connected devices, view search results, watch YouTube clips, or stream images from Google Photos.

What the device is notably missing, though, is a camera. Google's VP of product management, Diya Jolly, said on the company's blog that this was very intentional: "We consciously decided to not include a camera on Google Home Hub, so you feel comfortable placing it in the private spaces of your home, like the bedroom."

While Google is acknowledging that now might not be the best time to ask its users to put connected cameras in their homes, Facebook is doing just that. The social media giant recently released its own smart-home device, called Portal, that's specifically designed for people to make and receive video calls in their home easily. There are two versions of the device: one with a large 15.6" portrait display and one with a smaller 10.1" landscape display.

Facebook has acknowledged that privacy might be a concern. It allows users to tap the device at any time to quickly turn off the microphone and camera. Both devices also come with a physical cover that can be placed over the camera lens. The company also says it doesn't listen to phone conversations or keep the contents of video calls.

With these features, Facebook is clearly trying to tamp down potential user concerns about the device. Nevertheless, the company's timing of asking users to put a device in their home that has both a microphone and a camera is terrible. Facebook is essentially asking users to ignore its recent privacy violations and data breaches and to trust the company with facilitating video phone calls in their kitchens, living rooms, and bedrooms.

There's no denying that both of these companies collect gobs of user data so that they can sell digital ads to users on their platforms: Facebook and Google will comprise nearly 58% of U.S. digital ad sales this year. But at least Google recognizes that users are cooling to the idea that they have to hand over any feeling of privacy in order to receive a service from a technology company.

What's worse for Facebook is that a recent Pew Research study shows that Americans have the least confidence in social media companies to protect their data, when compared to the federal government, businesses, email providers, and cell phone and credit card companies.

It's likely true that Facebook won't collect user data from Portal and that the company is doing everything in its power to protect its users' privacy during video calls on the device. Yet Facebook is still asking for users to trust it even more than before, at a time when its privacy stumbles have become hurdles.

I think Facebook's approach puts the company at a severe disadvantage to Google and other companies that are already making inroads in the connected-home market. By 2026, this market is expected to be worth $138 billion. The companies that make the biggest moves now -- and earn user trust -- will likely benefit the most.

Google has an advantage because its smart-home speakers already lead the market, outpacing even Amazon's popular Echo devices. Furthermore, the company's ownership of the connected-home company Nest means that it has already entered people's homes with some measure of success.