Upwork (NASDAQ:UPWK), the operator of the largest online freelance marketplace in the world, recently went public. The company's stock skyrocketed about 30% on its first day of trading, which is a clear indication that Wall Street is excited about this business.

So are Upwork's shares a buy? Let's put the company through my detailed investment checklist to find out. 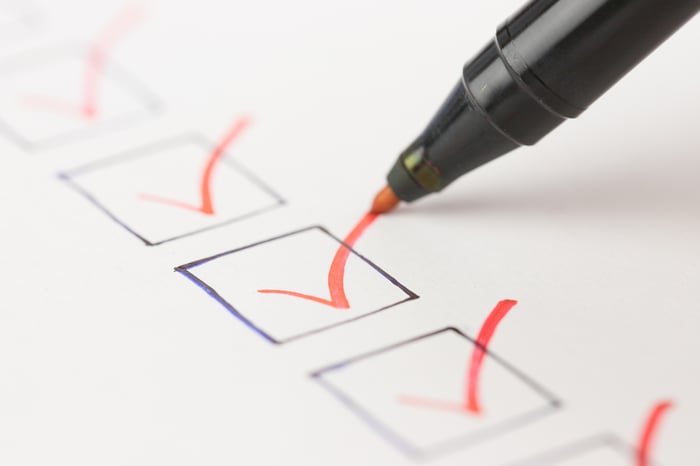 I'm a big fan of investing in companies that are in tip-top financial shape.

Here's an overview of Upwork's financials as they exist today:

I like that Upwork has a cash-heavy balance sheet and that it's free cash flow positive. Its net loss is also small in the grand scheme of things.

Generally, I think that the company is in good financial shape.

Broadly speaking, there are four different types of competitive advantages.

I think it's safe to say that Upwork currently benefits from at least two of them:

When combined, I believe that these two factors provide Upwork with a decent moat.

You've likely heard the term "the gig economy" before. The idea is that there is a growing class of freelancers who are either looking for extra income on the side or have enough volume to make freelancing their full-time career. This is a megatrend that shows no signs of slowing down.

The increasing popularity of freelance work has enabled Upwork's key numbers to trend in the right direction for many years:

*Through the first six months of 2018. Table source: Upwork.

These numbers are already impressive, but McKinsey Global Institute estimates that online talent platforms could eventually pull in $2.7 trillion in gross service volume by 2025. Even if that estimate is off by an order of magnitude, I think it's fair to say that the opportunity ahead of Upwork is truly massive.

I like to think about the interaction between a company and its customers from numerous angles when considering the company as an investment:

Upwork, as exists today, was formed when two online talent marketplaces called oDesk and Elance were merged in 2015.

Elance's co-founders, Beerud Sheth and Srinivas Anumolu, have since moved on and are no longer with the company.

Efstratios Karamanlakis was one of the co-founders of oDesk and currently serves as the Upwork's CTO. His other co-founder, Odysseas Tsatalos, left the company in 2015.

Collectively, all of the executive officers and directors at the company own more than 40% of shares outstanding. That's a lot of skin in the game.

On the flip side, the company's ratings on Glassdoor.com are only so-so. Its overall score is 3.6 out of 5, and only 62% of employees would recommend the company to a friend. CEO Kasriel gets on overall approval rating of 74%.

Upwork's headquarters is located in Mountain View, California, which is the heart of Silicon Valley. The company's so-so ratings on Glassdoor might make it hard for the company to recruit and retain top talent in the Bay area.

I love to buy stocks that have a history of creating value for their shareholders. Since Upwork has only been public for a few days, we don't have a lot of data to work with.

Having said that, I think that it's a good sign that shares popped on their first day of trading and that the stock currently trades above its IPO price.

In an effort to minimize my chance of making the same mistakes twice, I like to check to make sure that the investment thesis doesn't have any glaring holes in it:

Upwork's results weren't perfect, but I think there are a lot of reasons for investors to add this stock to their watchlists.

Having said that, I'm not a big fan of buying companies immediately after the IPO. That's why I'll green thumb Upwork in my CAPS page today and keep an eye on it for its first few quarters on the market. If all goes well with its first few quarterly reports, then I'll be happy to initiate a starter position -- even if it means paying a higher price.