Yet the price boost from tariffs has not led to the outcome most would expect. Since the announcement of the tariffs, shares of aluminum producers Alcoa (NYSE:AA) and Century Aluminum (NASDAQ:CENX), and steel producers United States Steel (NYSE:X) and AK Steel Holding (NYSE:AKS) are all down more than 16%. Let's take a look at why the Trump tariff hasn't been the right salve for these steel and aluminum stocks. 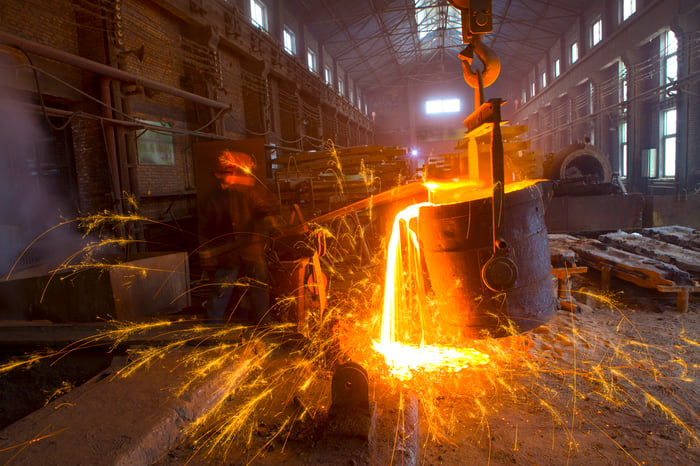 Tariffs are good for business -- unless you have manufacturing elsewhere

When Alcoa split up with its aluminum component manufacturer Arconic, it benefited immensely from Arconic taking the lion's share of the company's debt. Alcoa was left with a net debt-to-EBITDA ratio of 0.3, which is incredibly low for a capital-intensive business. This reset of the balance sheet gave the company a significant financial boost and led to its stock hitting multiyear highs as recently as May.

Since then, though, its stock has started to slide. Even though aluminum prices in the U.S. are up, that isn't the case for all of Alcoa's manufacturing as about 28% of the company's aluminum smelting capacity is in Canada. Since Canada was not granted a tariff exemption as many thought would happen, Alcoa estimates that the current tariff regime costs the company between $12 million and $15 million per month to move product from Canada to the U.S. The tariffs were a large part of the reason why CEO Roy Harvey reduced Alcoa's profit outlook for the year by $500 million in July.

There could be some relief on the horizon for Alcoa after one of its largest competitors, Norsk Hydro, decided to shut down a bauxite refinery that produces alumina earlier this month. Alcoa sells about 69% of its alumina production to independent third parties, and the shuttering of this facility should lead to much-higher alumina prices. 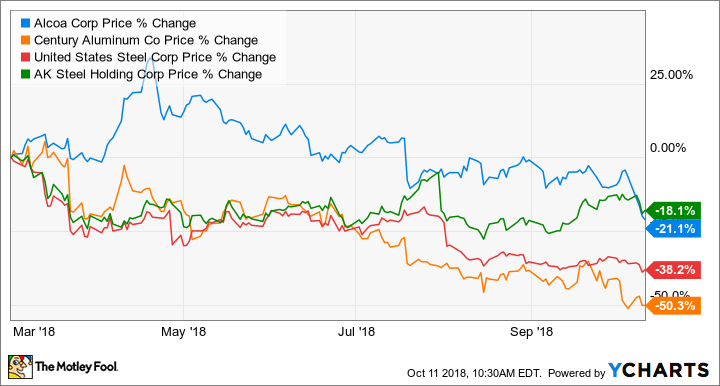 Over the past several months, two of its largest material inputs for smelting aluminum -- alumina and petroleum coke -- have increased significantly. According to Century's second-quarter earnings report, the prices of both alumina and coke have more than doubled since January 2017. While the price of finished aluminum has increased over that period as well, the rise isn't nearly as large as the increase in input costs for the company.

Management is in the process of restarting one of its smelters in the U.S., which has been a detriment to earnings over the past couple of quarters. Perhaps some higher volume will boost earnings, but alumina prices have yet to show signs of slowing down. That could put some margin pressure on Century for some time.

Still paying penance for past missteps

Both U.S. Steel and AK Steel have been stuck between a rock and a hard place for years. On the one hand, they both relied heavily on older blast furnace technology to manufacture steel. This type of steel manufacturing process has to be done on incredibly large scales and the facilities have to run at high utilization rates to be economical. The growing use of electric arc furnaces in the U.S. -- a process that is cheaper, can be done on a smaller scale, and can be easily turned on and off -- has made it harder and harder for blast furnaces to be competitive in today's market.

While both of these companies were in desperate need for upgrades, neither was in a position to make them. Both had high debt levels and were barely turning a profit, which meant that there wasn't much money available for investments. Both companies sport a times interest earned ratio (EBITDA divided by interest expenses) well below their U.S. and international steel manufacturing peers. To make matters worse, U.S. Steel was also trying to recover from an incredibly ill-advised investment in Stelco back in 2012. 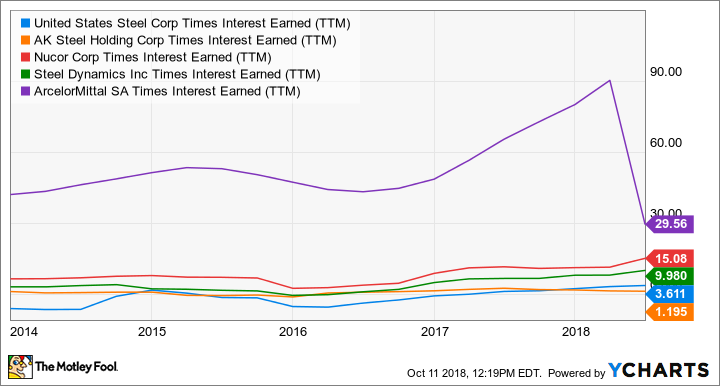 For U.S. Steel, one of the things that has investors uneasy right now is that management is embarking on a $2 billion asset revitalization program designed to boost productivity. That may sound good on the surface, but this isn't the first time management has promised significant operational improvement with asset revitalization programs. Its 2013 "Carnegie Way" initiative certainly didn't yield the results that management promised.

As for AK Steel, well, its debt levels are simply too high to make any significant changes to the business. A 1.19 times interest earned means that it's barely covering interest expenses, even at current elevated steel prices. Management is touting its ability to refinance large portions of its debt to extend its maturities and lower some interest payments, but it has yet to make considerable progress in lowering the total debt load. It's also hard to trim debt when also acquiring companies that do some downstream steel processing like tubular and press-stamped steel.

Until these steel companies can prove that they can significantly improve the balance sheet and make investments in upgrading their facilities that actually generate returns, neither U.S. Steel nor AK Steel Holdings will be able to reap many benefits from higher steel prices.

Headlines can be deceiving

I'm guessing that if someone had told you steel and aluminum producers would be down as much as 50% the day that import tariffs were announced, you would have thought them crazy. Higher prices should have been the thing that finally allowed these companies to excel, but the nuances of tariffs, higher input costs, and the challenges of making an outdated technology competitive again have more than offset any price bump for steel or aluminum.

You could probably argue that these stocks are selling at incredibly cheap prices today, especially if the tariffs continue for some time. The trouble with that assumption is we don't really know how long the tariffs will last. If these stocks are already struggling with what are arguably artificially elevated prices, then what will happen to them if those tariffs go away?