With October dates being crossed off the calendar, investors are moving through the final quarter of 2018 looking for the companies that have what it takes to overcome competition, adapt to unexpected challenges, and elevate portfolio performance in years to come. While small-cap stocks can post more explosive gains on lower pure-dollar sales and earnings growth, there are also advantages to large companies that can leverage their size and associated competitive advantages to expand the reach of their businesses and shore up strong market positions.

For this roundtable, we asked three Motley Fool contributors to shine some spotlight on a top large-cap stock to buy this month. Read on to see why they identified Nike (NYSE:NKE), IBM (NYSE:IBM), and AT&T (NYSE:T) as companies that are poised to deliver wins for shareholders. 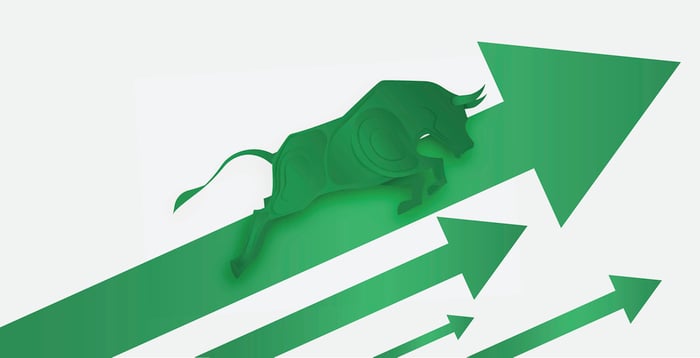 The sports footwear and apparel titan (finally) returned to robust sales gains in the key U.S. market recently, with growth speeding up to a 6% rate to kick off fiscal 2019, up from 3% in the prior quarter. Its strong inventory position promises to keep that momentum going while generating improved profitability, too.

Nike is predicting faster sales gains and rising profit margins over the next few years thanks to a mix of several favorable trends that investors can already see lifting its business. These include a shift toward high-margin direct-to-consumer sales, an influx of innovative product releases, and robust demand in international markets.

Nike knows that its dominant global market position and strong finances are key competitive assets, and executives plan to press those advantages to maximum effect. It won't be cheap to build the world-class digital fulfillment and marketing capabilities that management is targeting. But, if recent results are any indication, Nike can make progress on those critical initiatives while delivering robust earnings growth to its shareholders.

Sitting out the rally

Tim Green (International Business Machines): Many large-cap tech stocks have soared this year, to the point where valuations look downright scary in some cases. But IBM has missed out, despite trading for less than 11 times earnings. Pessimism continues to keep IBM stock down, and that's an opportunity for investors willing to wait for the market to correct its mistake.

IBM's results have been under pressure for years as the company implemented a wholesale transformation. IBM invested in cloud computing, artificial intelligence, blockchain, and other growth businesses that now account for about half of the company's total revenue. Sales are growing again, and margins are starting to show signs of recovery.

IBM has relationships with customers that span decades in some cases, and its products are deeply entrenched in certain industries. That gives IBM a leg up as it tries to sell its newer technologies. The company has been able to sign large multi-technology deals that few other companies could match.

IBM doesn't look like a top stock based on its stock chart. But there's a lot of upside potential for patient investors.

Keith Noonan (AT&T): Telecom giant AT&T's sluggish growth and stock performance (shares are roughly flat over the last five years) have contributed to it being thought of as an investment that's only good for its dividend. The company's returned-income component is certainly appealing, and with a roughly 6% yield and a 23-year history of delivering annual payout growth, it's probably the most dependable reason to own the stock. However, there's a good case to be made that shares are undervalued at current prices and could deliver substantial capital appreciation for patient shareholders.

AT&T stock trades at roughly 10 times this year's expected earnings and 12 times expected free cash flow (without factoring in the contribution from the Time Warner businesses), levels that leave room for upside despite pressures in the mobile wireless space, cord-cutting trends hurting DirecTV profitability, and the admittedly sizable debt load. So long as the company's merger with Time Warner holds up to additional challenges from the Justice Department, AT&T should have the opportunity to leverage its newly acquired entertainment businesses to take advantage of an expanding global market for entertainment and capitalize on synergies with its other units.

Research by the company found that delivering targeted ads with Warner content through its network could command advertising rates that were as much as five times higher than would be generated through cable distribution. AT&T recently launched a new advertising unit to take advantage of this opportunity with Warner content and other content distributed through its network, and the market doesn't appear to be pricing in the potential here. The telecom giant also has an opportunity to reestablish its wireless performance lead over rising competitors T-Mobile and Sprint with the rollout of its 5G network and to tie in its recently integrated television and video game assets into its next-gen network push.