Please ensure Javascript is enabled for purposes of website accessibility
Log In Help Join The Motley Fool
Free Article Join Over 1 Million Premium Members And Get More In-Depth Stock Guidance and Research
By Todd Campbell - Oct 14, 2018 at 9:46AM

Medicare Part B premiums are heading higher next year because of increasing healthcare costs, and that could take a bigger bite out of your Social Security income.

First, some background on Medicare Part B 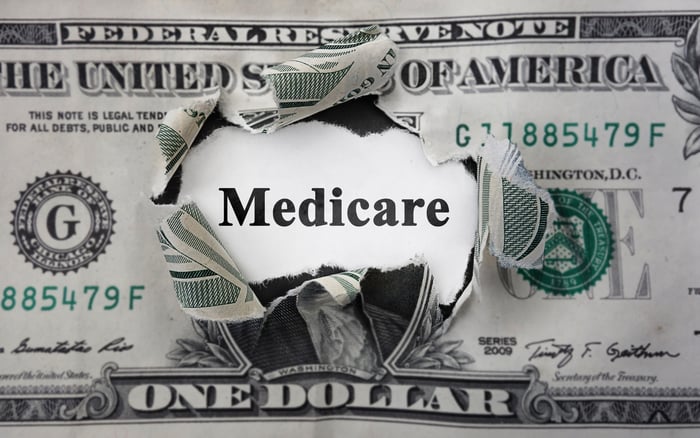 Medicare recipients usually aren't charged a premium for Part A, but they are charged monthly premiums for Part B and Part D, and they can be charged for Part C, too, depending on the plan's coverage.

U.S. income tax revenue funds most of Part B costs through the government's general fund, but about 25% of the program's expenses are paid for by recipients via their premiums. Those premiums are usually quoted for average income Medicare recipients, but high-income earners may pay more. For example, the following chart shows the premiums paid by recipients by income level.

How premiums are changing in 2019

As I mentioned, Medicare Part B premiums are increasing by about 1.1% in 2019 to $135.50, but many Americans could see their premium increase by more than that because they've previously benefited from the hold harmless provision.

Social Security uses the consumer price index for workers (CPI-W) to calculate annual increases to benefits, and because healthcare costs have historically risen much faster than other goods and services, Part B premiums have increased by more than Social Security's annual cost-of-living adjustments, or COLAs.

In 2018, catching up to current premiums caused millions of Americans to forgo their 2% Social Security COLA increase. According to the Senior Citizens League, about 40% of all Social Security recipients saw a $5 or less increase in their Social Security because most of their increase went to bringing their Part B premium to current levels.

The situation won't be as bad next year, but millions of people are still paying less than they're supposed to for Part B insurance, and that means a good chunk of their 2.8% Social Security benefit increase in 2019 could go to Medicare again. For instance, the average person who is held harmless is paying a premium of $130, rather than $134, in 2018, so if they pay the $135.50 premium in 2019, their premium will increase 4.2%, not 1.1%.

It cost Medicare $710.2 billion to cover 58.4 million Americans in 2017, and according to Medicare's trustees, costs will continue to climb for the foreseeable future. In its 2018 annual report, it estimated Medicare spending as a percentage of U.S. gross domestic product would climb to 5.9% in 2042 from 3.7% in 2017 under current law, and that if cost protections provided by the Affordable Care Act were dismantled, Medicare spending could increase to 6.2% of GDP in 2042. Given this outlook, it looks like Medicare Part B premiums will continue to take a big bite out of your Social Security COLA increases in the future, too.