With all the developments that are occurring involving autonomous vehicles, it's easy to imagine a future in which commuters sit back, relax, and are shuttled to their destinations by self-driving cars. Continuing developments in artificial intelligence (AI) and advances in computer vision are coming together to make this futuristic dream a reality. Yet the technology won't be limited to the open road.

Rolls-Royce (OTC:RYCEY) develops power and propulsion systems for a wide range of transportation assets including aircraft and ocean vessels. As a key player in the international shipping industry, the company is joining forces with Intel (NASDAQ:INTC) to advance its plans to make self-piloting ships a reality. 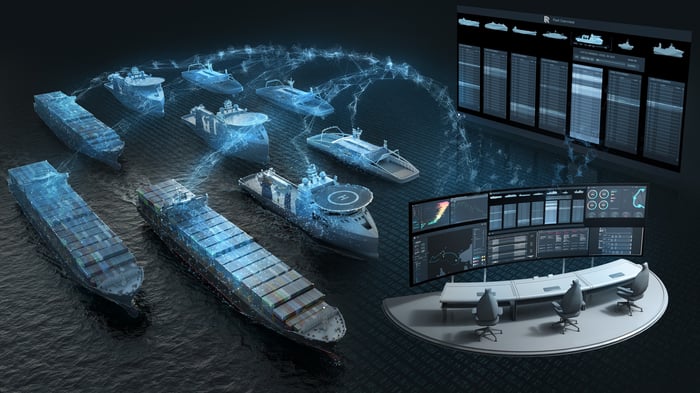 Data from ships will use AI to improve safety and efficiency. Image source: Rolls Royce.

The company already uses AI to create intelligent systems to make commercial shipping safer, but now Rolls-Royce is collaborating with Intel to process the massive amount of data necessary by turning these ships into floating data centers. Rolls-Royce's Intelligent Awareness System (IAS) uses sensor fusion and enhanced decision making that combines data from LIDAR, radar, thermal cameras, HD cameras, satellite data, and weather forecasts. Each vessel can capture up to 1 terabyte (or approximately 1 trillion bytes) of data per day -- even when the data is compressed.

The data is then captured and stored using Intel's Xeon Scalable processor-based servers so that it can be downloaded and analyzed for additional insights once the ship has docked.

"This collaboration is helping us to develop technology that supports ship owners in the automation of their navigation and operations, reducing the opportunity for human error and allowing crews to focus on more valuable tasks," said Kevin Daffey, director, engineering and technology and ship intelligence at Rolls-Royce. "Simply said, this project would not be possible without leading-edge technology now brought to the table by Intel," he said.

A long and ongoing voyage

This isn't the first such partnership for Rolls-Royce. The company partnered with Google, a division of Alphabet (NASDAQ:GOOGL) (NASDAQ:GOOG), to use its deep-learning neural networks to develop intelligent systems that would make existing vessels safer and pave the way for autonomous ships. These systems provide crew members with additional information by fusing data from a range of sensors with the vessels' existing systems and analyzing that data in real time.

The Google Cloud Machine Learning Engine leverages the same artificial intelligence that underlies Google's image and voice search expertise. These systems use millions of data points and complex algorithms to detect patterns that might otherwise be missed. By using Google's AI expertise to process data already captured by Rolls-Royce, the system can provide predictive analytics with much greater speed and accuracy than its human counterparts can.

International shipping is involved in an estimated 90% of global trade, and that number is expected to increase. The global fleet currently numbers an estimated 100,000 ships, and a quarter of those carry Rolls-Royce equipment, according to the company.

Dangerous ocean conditions have contributed to 1,129 shipping losses over the past decade, according to Rolls-Royce. The majority of those are the result of human error -- especially fatigue -- which could account for between 75% and 96% of all marine accidents. By automating routine tasks and processes and detecting obstacles and hazards in real time, these systems can help improve the safety and efficiency of these oceangoing vessels and free up the crew for more critical decision making.

A drop in the ocean

With that much commerce involved, the stakes are high, and even small improvements in safety and efficiency can result in substantial savings. Systems like these can lower insurance premiums, and the captured data can provide valuable insight in the event of a collision. Rolls-Royce believes autonomous systems could eventually reduce overall shipping costs by as much as 22%.

Rolls-Royce believes that reduced crews and remote support are just over the horizon and could be in operation by 2020. The company envisions a world in which totally unmanned oceangoing vessels could launch as early as 2035.