Please ensure Javascript is enabled for purposes of website accessibility
Log In Help Join The Motley Fool
Free Article Join Over 1 Million Premium Members And Get More In-Depth Stock Guidance and Research
By Danny Vena - Dec 19, 2017 at 7:33AM

Self-driving cars are dominating the headlines, but artificial intelligence may soon be driving more than just cars.

Self-driving cars weren't even on the horizon a little more than a decade ago, but now it seems that every major automaker and the biggest firms in Silicon Valley are hot on the trail of driverless cars.

Waymo, a subsidiary of Alphabet (GOOGL -0.21%) (GOOG -0.27%), is widely considered the front-runner in autonomous driving. Waymo has compiled more than 3.5 million miles driven on the highways and byways of the U.S. The company embarked on an early rider program in early 2017, shuttling consumers around the Phoenix metro area to gauge public reaction to the technology. The company recently removed the backup drivers from the vehicles, making them truly autonomous.

Now, Google has partnered with Rolls-Royce (RYCEY 1.94%) to use its pioneering artificial intelligence (AI) to bring self-piloting capability to ships at sea. 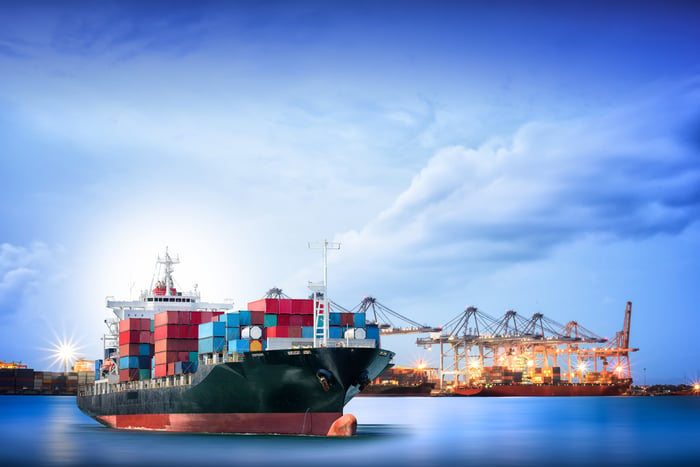 Ships could soon be piloting themselves, thanks to Google AI. Image source: Getty Images.

The initial work will be done by the deep-learning neural networks that Google currently uses for image recognition. Rolls-Royce will use Google's Cloud Machine Learning Engine, and the system will be fine-tuned "for detecting, identifying and tracking the objects a vessel can encounter at sea." This will help make current vessels more efficient and increase safety for the crews who operate them.

Ships currently use a number of traditional technologies like radar and automatic identification system (AIS) to detect other vessels in the water and for collision avoidance. AIS is a tracking system used to determine the identification and specific information for ships, by using radio frequencies and GPS transmitters linked to satellites. Smaller vessels won't necessarily have these sophisticated technologies, so crew members keep watch for these and other water-borne hazards.

By positioning cameras, sensors, and scanners around the vessel, it can be outfitted with 360-degree computer vision. This would enable an AI system to fuse the resulting data with information from a variety of other shipboard instrumentation including radar and AIS, potentially relieving the crew of this responsibility.

Since there is far less oceangoing traffic, fewer obstacles, and more straight line of travel, you might be tempted to assume that a self-piloting ship would be easier to engineer than an autonomous car. Karno Tenovuo, the senior vice president for ship intelligence for Rolls-Royce, explained that this isn't the case:

A typical car AI aims to replace one human -- the driver -- whereas a typical cargo ship has over 20 crew members, and you need to cover all of the jobs they would do on a vessel. In a lot of ways the complexity can be greater than what an automobile has to deal with.

It would also be necessary for an autonomous ship to control cargo handling, security, and other shipboard systems.

Rolls-Royce heads the Advanced Autonomous Waterborne Applications Initiative (AAWA), a project that enlists the aid of leading universities, shipbuilders, equipment manufacturers, and classification societies to explore the many factors that would need to be addressed before self-piloting ships can take to the high seas.

The AAWA released a report that sets the stage for further research, by identifying three key areas for development -- sensor fusion, control algorithms, and communication and connectivity. This will be the starting point for its partnership with Google and the some of the goals for training its AI.

Rolls-Royce believes that the first of these ships with reduced crews and remote support will be in operation by 2020, and fully unmanned oceangoing ships could launch by 2035.

The greatest benefits gained would be safety and efficiency. Human error, fatigue in particular, is responsible for between 75% and 96% of all marine accidents, according to a report published by insurance company Allianz. Rolls-Royce also estimates that autonomous shipping could reduce shipping costs by as much as 22%.