Please ensure Javascript is enabled for purposes of website accessibility
Free Article Join Over 1 Million Premium Members And Get More In-Depth Stock Guidance and Research
By Joe Tenebruso - Oct 17, 2018 at 7:20AM

Which of these home-improvement retailers is the best choice for your portfolio?

Home Depot ( HD -1.19% ) and Lowe's ( LOW -0.07% ) have helped countless homeowners increase the value of their homes. They've also made many investors rich.

With their shares having soared 879% and 484%, respectively, over the past decade, Home Depot and Lowe's have created fortunes for their long-term shareholders. But which of these home-improvement giants is the better investment opportunity today? 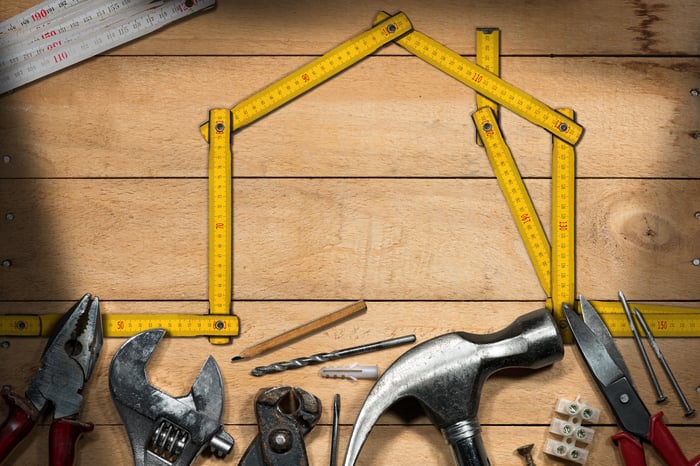 While Home Depot and Lowe's are the top two players in the home-improvement industry, Home Depot has some significant competitive advantages over its archenemy.

Home Depot's greatest advantage is perhaps its best-in-class omnichannel capabilities. The company is far more than just a traditional brick-and-mortar retailer. In fact, Home Depot generates the fifth-most e-commerce sales in the U.S., behind only Amazon.com, eBay, Apple, and Walmart, according to research company eMarketer. This increasingly important aspect of Home Depot's business is growing rapidly; the retailer's online sales jumped 26% in the second quarter. Better still, Home Depot's digital sales are also boosting in-store traffic, as 47% of its online orders are picked up in its stores.

Lowe's is also enjoying some e-commerce success. However, online sales make up a smaller proportion of its revenue and are growing less quickly; comparable sales at Lowes.com rose 18% in the second quarter. Lowe's is losing market share, as Home Depot's comp sales, revenue, and earnings all increased by higher percentages this past quarter.

All told, Home Depot is the clear leader in the home-improvement industry and has consistently outperformed Lowe's on most key operational metrics over time. I expect this to remain true in the years ahead.

Let's now take a look at how these retailers stack up with regard to some key financial metrics.

Home Depot's revenue base is nearly 50% larger than that of Lowe's. It's also the far more profitable business, with an operating margin of 14.5%, compared to 8.9% for its smaller rival. In turn, Home Depot generated more than twice as much cash from operations and free cash flow as Lowe's over the past year.

So although Home Depot is the more heavily indebted retailer, its stronger profit and cash flow production give it the edge here.

Lowe's revenue growth has slightly outpaced that of Home Depot over the past half-decade, but the latter has delivered higher profit growth during this time. 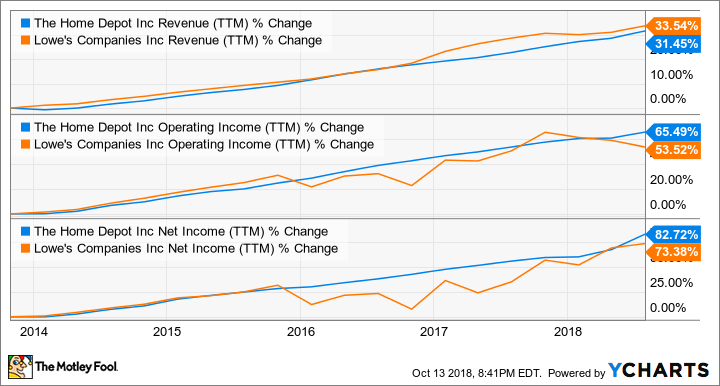 Over the next five years, Wall Street expects these two retailers to grow their earnings at roughly the same rate. Analysts forecast Lowe's earnings per share will rise by 15.2% annually, driven by its cost-reduction initiatives and low-single-digit revenue growth. Home Depot, meanwhile, is projected to increase its EPS by 14.9% per year, fueled in part by the continued strong growth of its e-commerce operations.

With such similar expected EPS growth, I'm going to call it a draw here.

On all four metrics, Home Depot's stock is more expensive than that of Lowe's. Investors appear willing to pay a higher multiple per dollar of free cash flow and earnings for the industry leader, which I believe is warranted, due to its strong competitive advantages and track record of outperformance. Still, the discount in Lowe's stock price is enough to give it a slight edge here.

Price matters, but business quality matters even more to the long-term investor. So while Lowe's stock is cheaper, Home Depot's operational and financial superiority make it the better buy today.