Some retail segments have lent themselves to e-commerce better than others. Books and electronics were among the first categories; Amazon (NASDAQ:AMZN) succeeded in part because it was well suited toward the internet. Amazon CEO Jeff Bezos chose to sell books first because he knew an online bookstore could carry a wider inventory than a brick-and-mortar store ever could. The benefit of reviews also made electronics a good fit for the online channel.

However, other categories have proven more difficult to sell online. Apparel, for instance, is rife with returns, a challenging factor when shipping is costly. Similarly, perishable food is also tricky, because food needs to be handled properly and customers need to be home to receive it. Auto parts is another challenging category to sell online. Chains like O'Reilly Automotive, AutoZone, and Advance Auto Parts (NYSE:AAP) have thousands of locations and carry tens of thousands of stock keeping units (SKUs). They also have knowledgeable employees to assist you, provide services like diagnostics, and cater to a customer base that often needs a spare part urgently.

Nonetheless, the auto parts industry, which brings in nearly $100 billion in annual revenue, has attracted attention from the likes of Amazon and Walmart (NYSE:WMT). 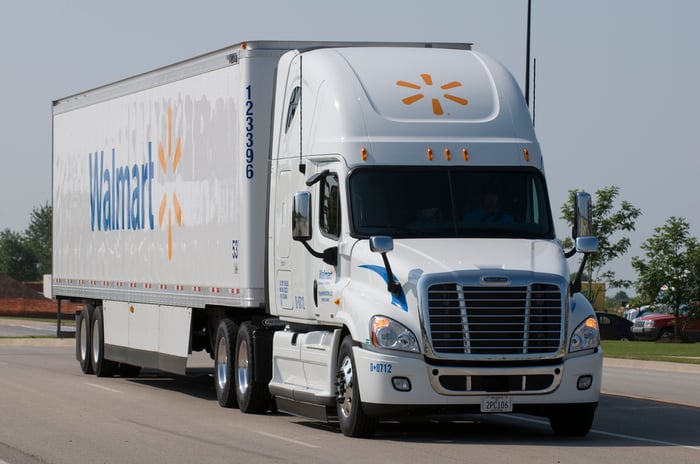 Amazon started focusing on auto parts for the "do-it-yourself" market last year and already generates $6 billion in annual revenue from the segment, according to research firm MoffettNathanson.

Now Walmart has made an aggressive move into auto parts. The retail giant is partnering with Advance Auto Parts to make an automotive specialty store on Walmart.com, which is expected to begin rolling out early in 2019. Walmart already operates 2,500 auto centers around the country, which the online auto parts store will complement, and the two companies also plan to provide home delivery and same-day pickup at Walmart and Advance Auto Parts stores once the new online store is up and running.

Advance Auto Parts brings in more than $9 billion in revenue annually, so the partnership should give Walmart's online platform a significant boost.

The power of not being Amazon

In some ways, Walmart's biggest advantage in e-commerce is simply that it isn't Amazon. Amazon dominates e-commerce, controlling approximately half of all online sales in the U.S, but the company is not just a threat to other retailers. Its tech prowess has earned it the ire of fellow tech giants, and its experiments in far-flung sectors like shipping and healthcare have caught the notice of other industry leaders.

Walmart, once retail's big bully, has ceded that title to Amazon, but as a result Walmart is particularly attractive to other companies looking to fend off Amazon. Walmart has formed partnerships with tech titans like Google and Microsoft, acquired a slew of retailers including Bonobos and Modcloth, and opened up its online platform to Lord & Taylor and now Advance Auto Parts.

Though those moves haven't necessarily had an impact on Amazon's growth, they will help make Walmart successful, especially at a time when its e-commerce platform is still small compared to Amazon's.

With Walmart's 2,500 Auto Centers, the automotive segment appears to be area in which the retailer should have a natural advantage over Amazon. Resembling Walmart's tie-up with Advance, Amazon recently partnered with Sears to provide installation and balancing for tires sold on Amazon at Sears Auto Centers, a sign that a successful auto business requires physical locations. However, that deal may be in jeopardy following Sears' bankruptcy.

Automotive, like grocery, is sector in which it's beneficial to have omnichannel capabilities. Walmart needs to press these advantages, as well as partnerships, in order to maintain strong growth in e-commerce. Teaming up with Advance Auto Parts is a clever way to accomplish both.