Shares of RV-maker Winnebago Industries (NYSE:WGO) leapt 17.6% in early trading after the company reported earnings Wednesday, before retreating to a more recent price up just 5% from yesterday's close. 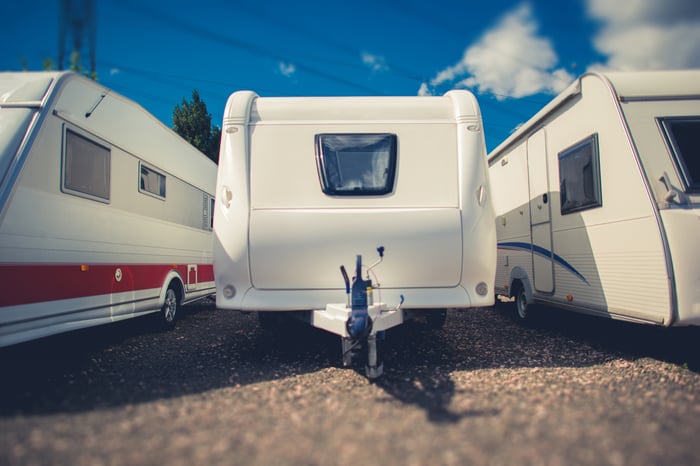 But if that's the case -- which explains why the stock surged at first -- then what explains Winnebago's giving up most of its gains later in the day?

Sales for Winnebago's final quarter of the year rose 18% in comparison to last year's Q4, and earnings rose 19%. These were impressive results to be sure, but a slowdown from the breakneck pace set earlier in the year. Winnebago ended fiscal 2018 with sales up 30% at $2 billion, and profits climbing 39% to $3.22 per share. With profits growing less than half as fast at the end of the year as they grew earlier in the year, investors may be wondering if the good times for Winnebago are approaching an end -- and the fact that Winnebago's sales of motorhomes grew only 2.5% in Q4 may be lending support to that theory. (Sales of towables, on the other hand, grew strongly, up 26% year over year in Q4).

Whether Winnebago's overall sales now begin to slow, rev back up, or simply continue growing at what was -- let's be clear about this -- still a very strong pace in Q4, remains to be seen. What I'll be most interested in is seeing whether Winnebago can improve its performance translating strong sales and profit growth into better free cash flow production.

In 2018, the $102.4 million in GAAP profit that Winnebago reported was backed up by only $54.6 million in real free cash flow -- just $0.53 in real cash profit for every $1 in claimed earnings. This was also a steep decline from the $83.1 million in FCF that Winnebago generated in fiscal 2017. Before buying Winnebago stock myself, I'm going to want to see the company do a U-turn on free cash flow production, and get it growing again.