As expected, Apple (NASDAQ:AAPL) does have more stuff to show off for 2018. There are several products that are reportedly in the pipeline that were not unveiled at the company's September event, which focused on iPhones and Apple Watch. The Mac maker has just officially announced that it is hosting a product event on Oct. 30. Instead of having the event at its Steve Jobs theater, the tech titan will show off its gadgets in New York this time.

Here's what investors can expect. 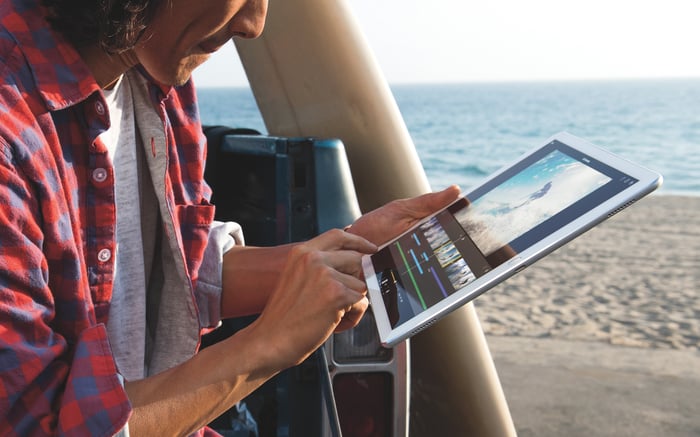 Reports surfaced last year that Apple was working on bringing its TrueDepth camera system and Face ID to the iPad Pro, along with an edge-to-edge display while removing the home button. Some analysts had expected the new iPad Pro to launch earlier this year, but it seems Apple needed more development time.

More recently, there have been clues within iOS 12 code that show Face ID is coming to the iPad, and the 3D facial recognition technology is expected to work in landscape mode. There are also rumors that Apple may use a USB-C port in the new iPads instead of its proprietary Lightning connector. It's also probably time to kill off the headphone jack for the tablet.

Apple is not expected to put an OLED display into the tablet, as OLED prices are still significantly higher than a traditional LCD panel, and iPad displays are much larger than iPhone displays. Shifting to OLED would require a massive price increase for Apple to maintain its margin profile. iPad unit volumes have stagnated for a few years, and jacking prices up would only hurt demand, so it makes sense to stick with LCD until OLED prices come down further.

Bloomberg reported in August that Apple was working on two new Macs, including a new entry-level MacBook. The new notebook is expected to replace the aging MacBook Air, which is currently the only laptop that Apple still sells that uses a traditional low-resolution display instead of its high-resolution Retina displays. Introducing a redesigned entry-level MacBook could help boost Mac unit volumes over the holiday shopping season.

Apple also has a new Mac Mini in the pipeline, according to the report, which is expected to better address professionals. The Mac Mini is also aging poorly, having last been updated four years ago. After admitting it made some mistakes with the Mac Pro thermal design, Apple has been rejiggering other Mac lines to target professional users, such as the iMac Pro.

There are some products that are unlikely to be announced at the event. Despite announcing AirPower, a wireless charging pad, last year, that accessory's fate remains largely unclear. Apple has reportedly run into technical challenges in developing the device, with it overheating. Apple has even removed most references to the device from its website, suggesting it could even be canceled altogether. Even if Apple is still working on AirPower, it definitely won't be ready this month.

Microsoft surprised the market earlier this month when it unveiled Surface Headphones, a set of premium wireless noise-canceling over-ear headphones. Apple is working on a similar product, which is expected to be released under the Apple brand instead of its Beats lineup. There had been a chance that Apple's headphones would be released this year, but Bloomberg reported over the summer that the company is now planning to launch them in 2019 alongside second-generation AirPods.

The event will cement Apple's product lineup as it heads into the busiest quarter of the year.