Though the industrial conglomerate's sales fell on a broad basis, missteps from its Arctic Cat business were the biggest culprit in this earnings miss.

Textron Inc. ( TXT 3.32% ) announced third-quarter 2018 results early Thursday, contrasting the relatively solid performance of its larger Aviation and Bell businesses with disappointing showings from its other core subsidiaries. The industrial conglomerate also detailed the successful divestiture of one of its product lines, and narrowed its full-year financial guidance.

With shares down around 11% on the day in response, let's take a closer look at the underlying drivers of Textron's results this quarter, as well as what to expect for the rest of the year. 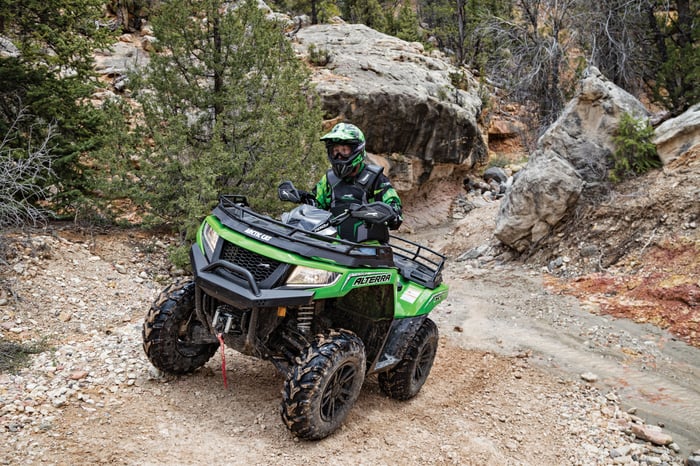 "Revenues were lower in the quarter, largely reflecting declines at Industrial and Textron Systems," stated Textron Chairman and CEO Scott Donnelly. "Operationally, we achieved margin improvements at Aviation and Bell, reflecting strong execution within those segments."

During the subsequent conference call, Donnelly explained that the steep decline in industrial segment profit was primarily related to an "unfavorable operating performance in specialized vehicles." This was specifically related to Textron's management of the Arctic Cat brand, which it acquired in 2017.

Specialized vehicles has undergone significant change over the past two years as we've expanded the product portfolio. While we've seen increasing revenue in the segment, we haven't seen the planned level of growth or delivered the operating leverage necessary to support the expected returns. We've made progress on new product introductions and continue to be encouraged by the favorable trends in the power sports market, but we need to work on our go-to-market strategy and focus on cost performance. We're focused on driving improvements in this business and believe it will be a valuable part of our portfolio moving forward.

Textron now expects full-year earnings per share from continuing operations of $4.81 to $4.91, and adjusted earnings of $3.20 to $3.30 per share (narrowed from its previous range of $3.15 to $3.35). Textron also reaffirmed its outlook for cash flow from continuing operations of the manufacturing group (before pension contributions) in the range of $750 million to $850 million.

In the end, that's not to say this was as bad a quarter from Textron as today's decline seems to indicate -- and its modestly narrowed earnings guidance in spite of its quarterly shortfall relative to expectations demonstrates as much. But while it's tempting to give the company the benefit of the doubt as it relates to realizing the fruits of its acquisition of Arctic Cat, it's disappointing to see these operational hiccups as it relates to the leading powersports brand. Until Textron can show it's capable of firing on all cylinders and return to sustained, profitable growth from each of its business segments, it's no surprise to see the stock pulling back.