Digital retail software and service provider Shopify (NYSE:SHOP) recently announced the opening of its first ever brick-and-mortar store. The space is located in downtown Los Angeles, a natural fit for Shopify's latest foray into the physical realm as L.A. is one of its most prolific markets for e-commerce. If all goes well, this could be just the first of many hubs for the e-commerce company as it spreads its message of entrepreneurship.

What this "store" does

Shopify's space in LA is being described as an entrepreneur space, where existing merchants and aspiring business owners can go for support and advice. Help with getting a new venture off the ground will be available, as will education on Shopify's various services that support online merchandising operations.

Shopify staff will be on hand, but small retailers and start-ups can also network with other successful owners at the space. L.A. is a good location to test out this concept. Not only is the city a hub for business in general, it's an important market for Shopify. The company says Los Angeles has over 10,000 Shopify merchants, 400 of which have sold at least $1 million in merchandise through its online platform. Shopify COO Harley Finkelstein had this to say:

The path to being your own boss doesn't need to be lonely or isolating. With Shopify LA we wanted to create a hub where business owners can find support, inspiration, and community. Most importantly, entrepreneurs at all stages and of all sizes can learn together, have first access to our newest products, and propel their entrepreneurial dreams. 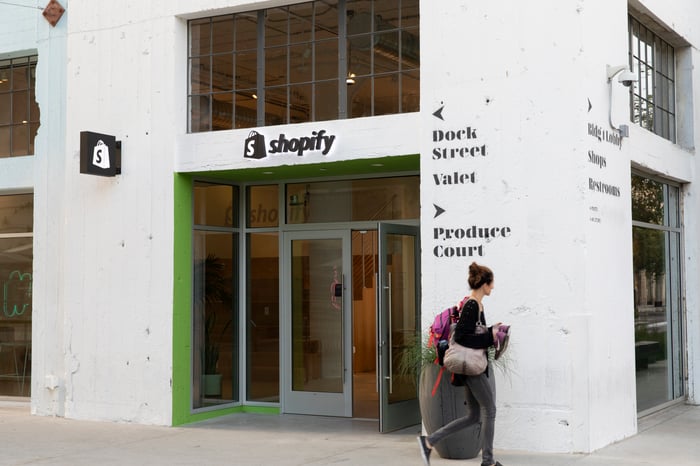 Shopify sells software and merchant services for digital-only and brick-and-mortar hybrid businesses, so the Los Angeles store is an obvious way to get its product into the hands of more customers. However, the e-commerce enabler is also a champion of small business, hanging its mission on the goal of making commerce better for all through encouragement of entrepreneurship.

While the company boasts some big name customers, most of Shopify's 600,000 merchants across 175 countries are small web, social media, or brick-and-mortar shops. Shopify touts being able to provide some of the back-office functionality of a big enterprise to even the smallest of home-based businesses. That has led to some explosive financial results.

During the first six months of 2018, subscription service revenue increased 57% from a year ago. Merchant services were up 71% as the value of merchandise sold increased, and the use of new services like Shopify Shipping and cash advances from Shopify Capital also contributed. Both subscription and merchant services benefit from a rising number of small businesses on the Shopify platform.

It should be a landmark year for Shopify as the company expects to conclude 2018 with at least $1 billion in revenue, the first time it has crossed the $1 billion milestone. Support for small start-ups is more important than ever, though. While the U.S. Census Bureau is reporting a 10% year-over-year increase in online sales through September, most of that is attributable to companies that already have a big online presence. Amazon (NASDAQ: AMZN) reported a 29% increase in product sales in the second quarter, and Walmart (NYSE: WMT) notched a 40% rise in its e-commerce department. It's worth noting that Shopify can help its customers sell on third-party sites like Amazon; however, Amazon and Walmart's quarterly growth figures imply the two retail heavyweights continue to consolidate online market share to themselves.

Where does Shopify go from here?

Shopify's success hinges on entrepreneurship success, and young start-ups are more likely to make it if they get support early on. Shopify's new space is a great way to help ensure that support exists, and it could also be a visible reminder that starting a new business -- while always a challenging endeavor -- is easier than ever before with the advent of online shopping. If the company finds it is able to better spread its message of small business ownership through Shopify L.A., don't be surprised to see more of these "stores" pop up in urban centers in the near future.