A mere decade ago, it would have been unheard of to search for high-yielding investments in the technology sector. In the aftermath of the Great Recession, investors were forced to hunt for yield in nontraditional sectors as bond rates were cut to nearly zero, and cheaply priced, high-yielding tech stocks forced yield investors to rethink the sector.

In the years since, the technology sector continues to boast high-yielding stocks. Read on to determine why our Motley Fool contributors chose Cisco Systems (NASDAQ:CSCO), Uniti Group (NASDAQ:UNIT), and Verizon Communications (NYSE:VZ) as three high-yielding tech companies for your portfolio. 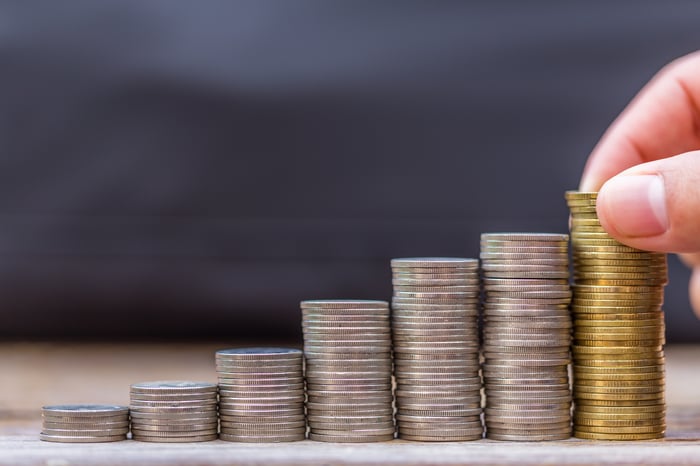 Leo Sun (Cisco): Cisco is the world's top manufacturer of networking routers and switches. Those are both slow-growth markets, but Cisco maintains its lead and locks in customers by bundling other software services with its products. It's also pivoting toward the higher-growth cybersecurity, collaboration software, and wireless markets to reduce its dependence on routers and switches.

Analysts expect Cisco's revenue to rise 4% this year as its earnings climb 15%. That growth should mainly be fueled by the growth of its software and services, a shift toward recurring revenue (32% of its top line last quarter), newly acquired businesses (such as Duo Security and AppDynamics), and big buybacks from its repatriated cash.

Cisco currently pays a forward yield of 2.7%, and it's raised that dividend annually for seven straight years. It spent over 100% of its free cash flow and earnings on that payout over the past 12 months, but the temporary spike was caused by one-time charges related to U.S. tax reform instead of operational challenges. Cisco's stock also remains cheap at less than 15 times next year's earnings.

Much of the $67 billion Cisco repatriated earlier this year is earmarked for buybacks and dividends -- so Cisco investors should expect the stock's valuations to tighten up and for its yield to rise. Cisco will also probably spend some of that cash on domestic acquisitions, which would bolster its software growth and strengthen its bundling capabilities. Those advantages make Cisco a solid income play for conservative investors.

Anders Bylund (Uniti Group): As a real estate investment trust, Uniti Group is required to pay out at least 90% of its taxable income to shareholders in the form of dividends in exchange for a more favorable tax schedule. It should come as no surprise, then, that the company's dividend policy is among the most generous you'll see in the tech sector.

Uniti does more than the bare minimum, too. Last year the company's dividend policy consumed 98.9% of its adjusted funds from operations -- a REIT-specific profit metric. The resulting dividend yield stands at a meaty 11.9%.

I do recognize that Uniti can be a tough dividend pill to swallow for many investors. The company was created by spinning off the network infrastructure assets from regional telecom Windstream Holdings (NASDAQ:WINMQ) in the spring of 2015, an inventive attempt to cut down Windstream's tax bills and preserve its capital. The telecom remains Uniti's largest customer to this day, and that's a problem. You see, Windstream is fighting for its corporate life, and a bankruptcy filing would hurt Uniti right away.

But I still recommend that you at least keep a close eye on Uniti Group. The company is working to distance itself from the struggling parent company, and making solid progress. Windstream's portion of Uniti's annual revenues started at 100% in 2015, sinking to two-thirds in the latest reported quarter, and Uniti aims to go below 50% Windstream revenues by the middle of 2019. And that's just a starting point. Uniti is well equipped to serve the general telecom industry with a growing network of fiber, cell towers, and support services. Ideally, Windstream might just fade out and become an insignificant slice of Uniti's total business before the telecom operator goes out of business.

If that gambit fails, you might want to be ready to pick up Uniti shares on the cheap when Windstream's taps finally plays. Or you could buy in at Uniti's current prices, which are riding low because of the high risk of relying on Windstream's payments, and prepare to ride out the storm if the largest customer goes away.

Either way, Uniti remains a strong business on its own with bright long-term prospects. This was always the best part of the old Windstream package, after all. Jamal Carnette, CFA (Verizon Communications): Verizon has underperformed the broader S&P 500 under President Trump, which is paradoxical, considering the president's accomplishments seem to benefit telecom providers more than any other sector:

Still, investors are wary that Verizon will be able to service its large debt pile, significantly invest in its network, and pay its large dividend yield of 4.5%. Verizon is dedicated to not only paying its dividend, but also raising it, having done so for 12 consecutive years. Management has committed to a $10 billion cost-saving/job buyout program to accomplish this goal. The combination of the cost cuts and future monetization from legal and regulatory changes should allow Verizon to pay dividends for years to come.