Good news for a rival drug translates to bad news for Tesaro.

Shares of Tesaro, Inc. (NASDAQ: TSRO) were down 10.8% as of 3:38 p.m. EDT on Monday. The decline appeared to be related to two developments. One was that analysts at investment bank Cowen reaffirmed its hold rating for the biotech stock, with a one-year price target of $38 per share. Tesaro's share price opened on Monday 10.5% higher than Cowen's price target.

Perhaps the more important news, though -- and likely the primary reason behind Cowen's rating for Tesaro stock -- was that AstraZeneca (AZN 1.78%) and Merck & Co. (MRK 0.74%) reported very encouraging results from a phase 1 study of PARP inhibitor Lynparza at the European Society for Medical Oncology (ESMO) Congress over the weekend. Lynparza is a major rival to Tesaro's ovarian cancer drug, Zejula. 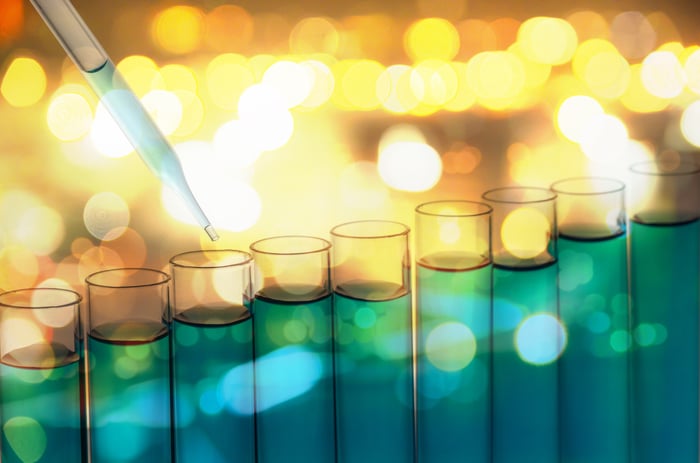 Tesaro made its own presentation of data at ESMO from a phase 1 clinical study of anti-PD-1 antibody TSR-042. Although the updated results were positive, it's still really early for TSR-042. And AstraZeneca's results for Lynparza overshadowed Tesaro's presentation.

AstraZeneca and Merck reported that 60% of ovarian cancer patients receiving Lynparza experienced progression-free survival after three years, compared to 27% of patients on placebo following platinum-based chemotherapy. Thus far, Lynparza is the only PARP inhibitor to show an improvement in progression-free survival when used as a first-line maintenance therapy for ovarian cancer.

The good news for Lynparza wasn't so great for Tesaro's PARP inhibitor, Zejula. Although sales for Zejula grew from $26 million in the second quarter of 2017 to $54 million in Q2 of 2018, Tesaro lowered its full-year revenue outlook for the drug. The biotech is already running into fierce competition from Lynparza and Clovis Oncology's PARP inhibitor Rubraca; the latest data from AstraZeneca and Merck could make it even harder for Tesaro to compete.

Tesaro has a few opportunities over the next few weeks to make positive impressions on investors. The biotech reports third-quarter financial results on Nov. 1. It also presents data at the Society for Immunotherapy of Cancer (SITC) Annual Meeting on Nov. 9.