The American Express Company (NYSE:AXP) reported its third-quarter earnings earlier this month, and shares reacted positively to the news. The credit card company's adjusted revenue grew to $10.1 billion, a 10% increase year over year, marking the sixth consecutive quarter of at least 8% growth. The company's diluted earnings per share (EPS) rose to $1.88, a 25% increase over last year's third quarter.

The strong top- and bottom-line growth was driven by a number of wide-ranging factors. Amex once again showed strong loan growth, growing its credit portfolio to $81.1 billion, a 16% increase year over year. New consumer credit accounts rose more than 50%, with half of he growth coming from millennials. Amex's small- and medium-sized enterprise (SME) customer segment grew billings by 23%, with management believing there is a "long runway for growth" still ahead of it due to the low penetration of the market in the countries where American Express is already doing business. Here's a look at the growth in the company's largest revenue segments:

With all of these positive developments taking place across the business, it's easy to lose the forest for the trees. Because the most important number from American Express's third quarter was its solid growth in its discount revenue. 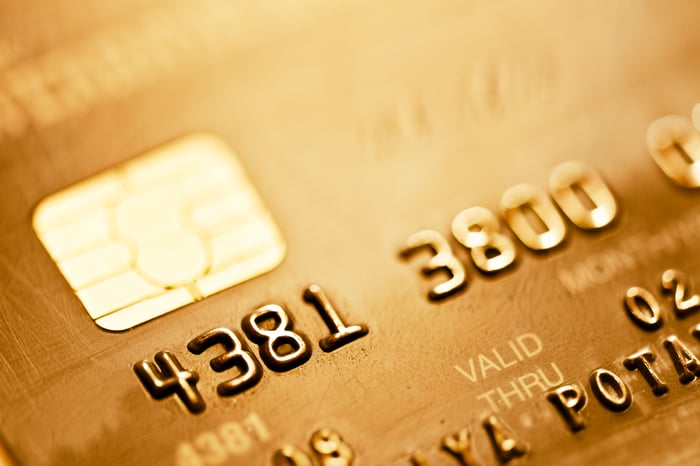 American Express saw its discount revenue, the fees charged to merchants every time an American Express card is used, grow by 8% year over year in the third quarter. Image source: Getty Images.

The most critical revenue line for American Express

Discount revenue is the money charged to merchants every time they accept an American Express card for a transaction. In Q3, Amex received $6.18 billion in discount revenue, an 8% increase year over year, representing about 61% of its total revenue for the quarter. It's important to remember that, while the company makes billions off of card fees and net interest income from its loans, discount revenue remains by far its largest contributor to its top line.

This quarter, the average discount rate was 2.38%, the percentage the credit card company takes for each transaction. This means that for every $100 an American Express consumer charges on their card, $2.38 is eventually makes its way back to the company as revenue. This rate is down from 2.4% in last year's third quarter, which is consistent with the company's strategy. American Express used to be known as a more exclusive card, meaning it charged higher discount rates than competitors. The past few years, however, the company has consciously lowered its discount rate as it has widened its merchant coverage, making it much more palatable for a greater number of merchants to accept the card.

Management made it clear on the company's conference call that it was much more concerned with raising the discount revenue, not the discount rate. CFO Jeffrey Campbell said:

On this front, American Express has made a deliberate decision to invest in its merchant coverage for its card products. During the conference call, CEO Steve Squeri said:

One of the ways American Express is accomplishing this coverage growth is with its OptBlue program, a program started to make it more affordable for smaller businesses to accept American Express at the point of sale. The program also featured other benefits for small businesses like free signage and listing on Amex's website.

Another way American Express has driven card usage is by making it easier for cardholders to use its product through digital channels. This quarter, the credit card company finally partnered up with PayPal Holdings Inc (NASDAQ:PYPL), allowing card members to redeem their rewards by using PayPal, pay their card billings with their PayPal account balances, and give American Express higher visibility on PayPal's core and Venmo platforms.

American Express also acquired two fintech companies this year, both of which might ultimately be made part of its app. The first, Mezi, an AI travel assistant, is already powering AskAmex, the company's concierge app.  The second, Cake, is a mobile payments company that is supposed to make it easier to make payments using mobile devices at bars and restaurants, eliminating the need for these businesses to accept cash.  Both should bolster Amex's mobile capabilities, ultimately making it easier for consumers to use and engage with their American Express products.

Based on the midpoint of its newly raised guidance for the full fiscal year, American Express shares now sport a more-than-reasonable P/E ratio of about 14.5, even after the jump its stock price experienced following the quarter. While there are many reasons to be bullish on the company's future, don't lose focus on what's most important: American Express is steadily growing its largest revenue stream, making sure cardholders can use their cards wherever -- and however -- they please. Over the past year, shares in the credit card company have gained 16%, essentially doubling the S&P 500 index's returns. Don't be surprised if these market-beating returns continue well into the future.