Twitter's (NYSE:TWTR) stock has dropped 33% in the past three months. Investors might change their tune soon, however, as the company is expected to show a year-over-year increase in revenue growth and earnings per share when it releases its third-quarter financial report on Oct. 25.

The social media company has had an encouraging year in terms of financial reports. In the past three quarters, Twitter has done a 180-degree turn and started reporting GAAP (unadjusted) profitability, rather than losses. In addition, its revenue growth has accelerated. But investors still aren't sure if Twitter can be trusted to consistently turn out solid financials.

Here are the top three things to watch for in its earnings report due Thursday before the market opens. 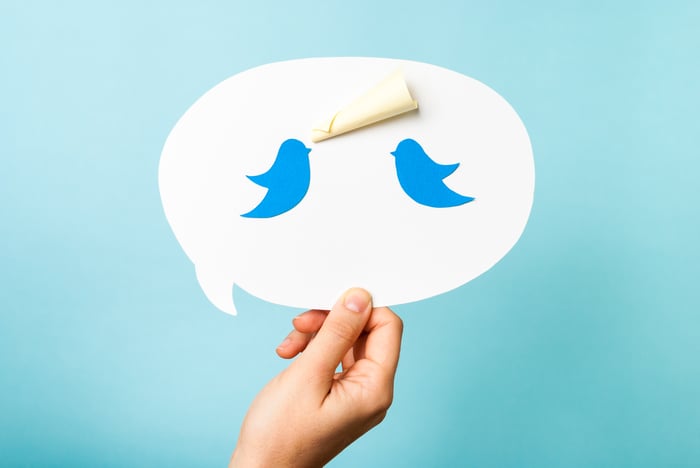 Investors will first want to know if Twitter can keep up its 2018 growth story. Twitter has managed to post three consecutive quarters of revenue growth. Now, investors want to see the company post growth for the fourth quarter in a row.

Last quarter, Twitter reported 24% year-over-year revenue growth to $711 million. This was an acceleration from the 21% and 2% revenue growth that it reported in the 2018 first quarter and 2017 fourth quarter, respectively. Twitter's revenue growth is expected to decelerate some in the third quarter but should still be an improvement over last year.

The second most important metric for Twitter is its daily active users (DAUs). While Twitter doesn't break out the exact number of DAUs, it does report growth rates for the metric. Last quarter, the company reported 11% year-over-year growth in DAUs. This was up from the 10% growth in the first quarter, but down from the 12% growth and 14% growth in the third and fourth quarters of 2017, respectively.

DAUs are important for Twitter because they can prove to investors that users' engagement with the platform is growing even if the number of monthly active users (MAUs) isn't growing.

While Twitter's revenue has been rising, its MAUs took a bit of a hit last quarter. In July, Twitter reported 335 million MAUs for the quarter, which was 1 million less than the 336 million it had reported in the previous quarter. Twitter's stock plunged 27% in July.

Seeing a drop in MAUs looks bad for the company, but it's not the full story. Twitter said that it's been purging its platform of bots and spam and that has naturally led to a decline in users. This is ultimately a good thing because Twitter will have a better idea about how many real users are engaging on its platform. However, in the meantime, its MAUs metric could be a concern for investors.

Last quarter, Twitter warned that it could lose "mid-single-digit millions" more users over the next few months. So this quarter, investors can expect another sequential decline of 1 million to 2 million in MAUs as Twitter works to rid its site of fake accounts.