Hawaiian Holdings (NASDAQ:HA) subsidiary Hawaiian Airlines soared to near the top of the airline industry in terms of profitability in 2016 and 2017, posting pre-tax margins of around 18% in both years. However, tough industry conditions and rising fuel prices have led to margin pressure in 2018.

An unusual series of natural disasters -- including hurricanes, a volcanic eruption, and flooding -- impacted the Hawaiian Islands during the third quarter. While Hawaii's main tourist areas were mostly unaffected, Hawaiian Airlines experienced a slowdown in bookings as the headlines made some travelers nervous. A typhoon that forced the closure of one of Japan's major airports for more than a week in September also weighed on revenue per available seat mile (RPASM).

As a result, Hawaiian Airlines had to reduce its Q3 unit revenue forecast twice in the past two months. Ultimately, RPASM declined 2%, whereas the carrier had initially expected a flattish performance.

Hawaiian Airlines did make some moves that should bolster its unit revenue and profitability going forward. First, it launched its long-planned nighttime interisland cargo service in August. This will help it continue to gain market share in the Hawaii cargo market, modestly diversifying its revenue base away from the passenger market. 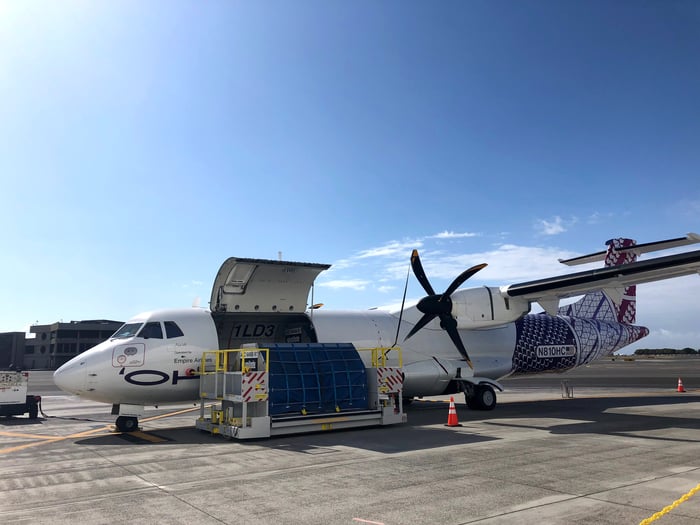 Second, Hawaiian Airlines announced the indefinite suspension of its loss-making Beijing-Honolulu route, which went into effect in mid-October. This capacity will be redeployed to help support the launch of five-times-a-week service between Boston and Honolulu next April.

Finally, Hawaiian Holdings stepped up its share repurchase activity in the third quarter. After spending just $22.7 million on buybacks in the first half of 2018, the company spent $31.2 million buying back stock last quarter. This helped cushion the blow from Hawaiian's decline in pre-tax earnings.

While RPASM declined last quarter at Hawaiian Holdings, and rising fuel costs put additional pressure on its pre-tax margin, management was pleased with the company's results. Executives were careful to note that few if any of Hawaiian Airlines' rivals will be able to match the 15.9% adjusted pre-tax margin it achieved last quarter.

"Through back-to-back hurricanes in Hawai'i and a typhoon in Japan, my colleagues minimized disruptions to operations," said Hawaiian Holdings CEO Peter Ingram. "Our healthy financial and operational performance in this eventful quarter once again demonstrated that the Hawaiian team is second to none."

Hawaiian Airlines expects some lingering negative impact from the weather-related bookings slowdown in its fourth-quarter results. Management also noted that a new bout of discounting on mainland-Hawaii routes has cropped up in the past seven weeks or so. As a result, the carrier projects that RPASM will be between down 2.5% and up 0.5% year over year in the fourth quarter. Meanwhile, its average fuel price is on track to rise 18% to 24% year over year.

Luckily, nonfuel cost trends are improving. Hawaiian Airlines is calling for Q4 nonfuel unit costs to be between down 2% and up 1% year over year. Additionally, the carrier's ongoing fleet transition should improve fuel efficiency by more than 4% in the quarter.

Looking even further ahead, management has predicted that nonfuel unit costs will continue falling in the next two to three years. Moreover, while the competitive environment could get worse before it gets better, company executives are confident that other carriers can't match the combination of product and price that Hawaiian Airlines offers. If they're right, it bodes well for Hawaiian Holdings' long-term earnings trajectory, even if EPS remains under pressure in 2019.