One metric that Intel (NASDAQ:INTC) investors have long focused on is gross margin, which The Motley Fool's Knowledge Center says "reflects how much of its sales a company hangs on to after paying the up-front costs of producing the goods or services it sells."

Although this is still an important metric for Intel investors to keep an eye on, the company seems to be trying to get shareholders to focus on another metric instead: operating margin. 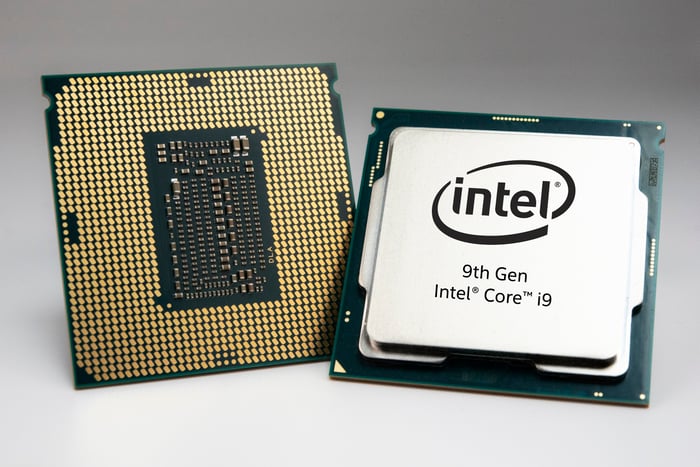 In fact, if you look at Intel's most recent earnings releases, when it provides financial guidance for the following quarter, it lists four metrics for investors to focus on: revenue, operating margin, tax rate, and earnings per share.

It seems that Intel wants investors to focus less on overall gross margin and more on the company's operating margin. Here's a potential explanation for why.

Intel has seen its revenue from areas outside of its core PC and data center microprocessor businesses grow in recent years. For example, the company now generates a significant (and growing) amount of revenue selling products like cellular modems and non-volatile memory.

"At the same time, some of that growth has lower gross margins," Swan conceded. In fact, on the call, Swan said that the "accelerating growth" in its cellular modem and non-volatile memory businesses is contributing to the implied gross margin degradation that analyst Stacy Rasgon asked about.

What's important to understand, though, is that while some of Intel's new revenue streams could carry lower gross margin percentages than the company's average (leading to dilution of that average), the company's goal in opening up those revenue streams in the first place is to boost overall operating income. That's why looking at Intel's gross margin percentage in isolation isn't going to tell you the whole story.

Operating margin is a metric that not only incorporates revenue and product costs, but it also takes into account the company's operating expenses -- that is, research and development spending as well as the company's marketing, general and administrative expenses.

Intel has made it clear that it's aiming to be more efficient in its spending. In fact, during the company's earnings call in April 2017, now-former CEO Brian Krzanich told investors that the company is "establishing a spending target of approximately 30% of revenue, which we expect to reach no later than 2020."

"While we expect revenue growth to play a role in achieving these targets, hitting this goal will require spending discipline and an intense focus on our strategic priorities," Krzanich said at the time.

Since the Intel's revenue growth has significantly exceeded what it had expected to see when it laid out its three-year plan at its February 2017 investor meeting, Swan reminded investors on its July 26 earnings call that "[in] January, we pulled in our 30% spending goal to 2018, a full two years ahead of schedule," and said that the company "is on track to meet that target, and our operating efficiency continues to improve."

We'll get our next update on Intel's operating income growth and operating margin when the company reports its third-quarter financial results on Oct. 25, 2018.