Shares of amusement park operator Six Flags (NYSE:SIX) got lowered Wednesday -- maybe not all the way to half-staff, but down a good 14.4% as of 1:55 p.m. EDT -- after the company reported missed earnings and revenue in its third-quarter announcement last night.

Six Flags reported profits of $2.16 per share on sales of $619.8 million last night, missing Wall Street predictions  of $2.32 in EPS and $633 million in revenue by sizable margins. 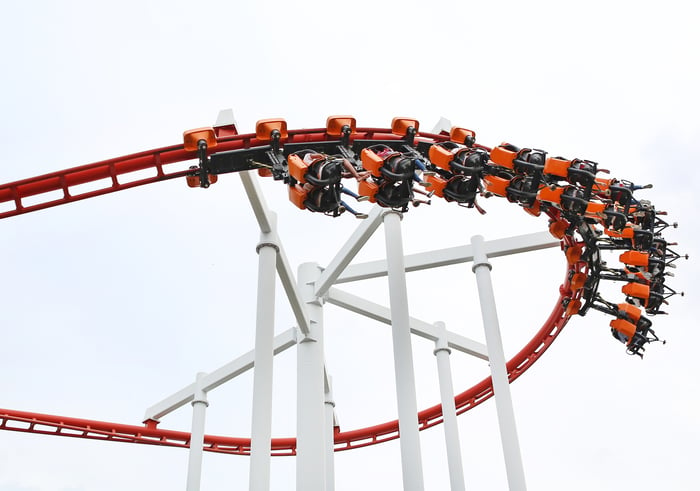 But how bad was the news, really? After all, if Six Flags didn't grow sales quite as much as analysts had hoped for, it did still manage to achieve 7% sales growth year over year, and without raising prices substantially. And 5% of the company's sales growth came from increased attendance at its amusement and water parks.

That being said, the news was still bad regarding profits, where in addition to missing predictions, the earnings that Six Flag did pull down were just 2% better than what it earned in Q3 2017. What's more, part of that already small increase in earnings was due to the positive impact of tax reform, and not to any successes Six Flags achieved on its own.

At a recent valuation of roughly 18 times earnings, Six Flag's valuation might not look particularly challenging -- except for two things. First, the company carries a sizable debt load that isn't reflected in its $5.3 billion market capitalization. With its $2.1 billion in net debt factored in, the company has a debt-adjusted market cap of $7.4 billion, and sells for closer to 25 times earnings.

And second, analysts who follow the stock think Six Flags will only grow earnings at about 6% annually over the next five years. That's already a pretty slow pace to be trying to justify a 25 multiple to earnings. And of course, last quarter, Six Flags only managed 2% growth -- just one-third of the growth Wall Street expected of it.