Get ready for some rideshare stocks. Both Uber and Lyft are planning to splash into the public markets next year, announcing their plans almost simultaneously last week. The dueling rideshare services have challenged each other repeatedly in recent years, so perhaps it's only natural that they would both go public at the same time.

Uber, the much larger of the two, is seeking a valuation of $120 billion, while Lyft is aiming for a $15 billion value when it debuts on the market. However, there's a big sign that Uber, as its long-anticipated initial public offering approaches, may be in trouble. 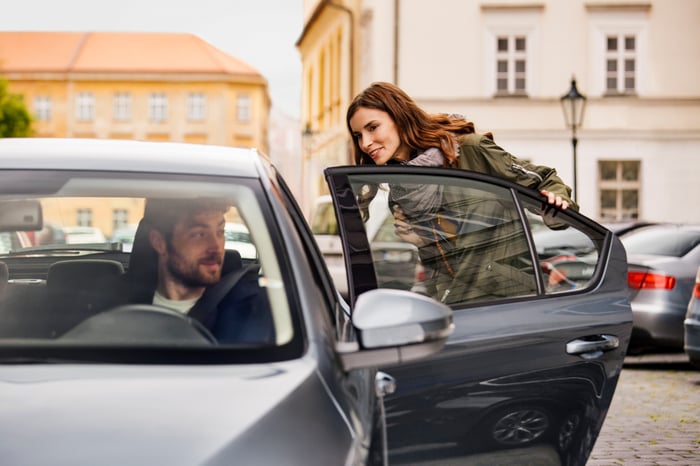 Uber's massive valuation has long been premised on huge opportunities in ridesharing and beyond as autonomous vehicles eventually become standard. The company has put up giant growth numbers as it aggressively expanded its ridesharing business and used that as a platform to reach into satellite services. These include Uber Eats, which delivers food; Uber Freight, which connects shippers with carriers; and Uber Elevate, which aims to provide a network of electric aircraft that shuttle people on demand between suburbs and cities and eventually within cities. The company is also investing in futuristic technologies like self-driving cars and drone delivery.

However, it looks like Uber's growth has slowed significantly in its core business in the U.S. According to data from market research company Second Measure, Uber's U.S. sales have essentially been flat since March, as shown in the chart below: 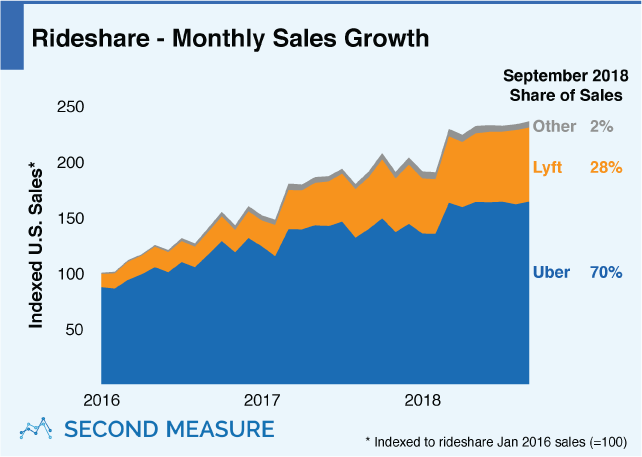 Based on Second Measure's index, Uber's sales rose from 162.5 in March to just 163.6 in September, an increase of less than 1%. Growth in the overall ridesharing market also slowed, but Lyft continued to gain share on its rival, as its sales rose from 59.4 to 66.5 (again, using the index numbers) from March to September, representing 12% growth. Its market share grew from 26% to 28%, while Uber's fell from 71% to 69%, according to this measure.

Those numbers seem to indicate that the domestic ridesharing market is reaching maturity, and there are other data to back that up. Brand awareness for Uber and Lyft in U.S cities is near-universal at this point. According to YouGov, Uber is the "third most famous" mobile app, and only 4% of survey respondents said they hadn't heard of it. [Google Maps and Instagram (in that order) ranked as the most famous.] Meanwhile, Lyft is the 11th most famous, and 15% of respondents said they hadn't heard of the company.

In New York, by far the country's biggest ridesharing market, Uber surpassed yellow cabs in number of rides a year ago, and that disparity between ridesharing services and yellow cabs has only grown since. A year ago in New York, there were about 61,000 Uber cars compared to just 13,587 licensed yellow taxis, and the city council recently responded to the surge in ridesharing services by temporarily capping the number of Uber and Lyft vehicles. As a result, growth is likely to be flat in the companies' biggest market, at least until the cap is lifted.

Both Uber and Lyft are still unprofitable, and are racking up sizable losses. Uber lost a whopping $891 million in the second quarter of this year, following a loss of $4.5 billion last year and $2.8 billion the year before that.

The company with the leading rideshare app has said it won't be profitable for at least three years. And at this point, turning profitable will require shedding loss-generating futuristic divisions like its autonomous-vehicle unit, or some fantasy math about future growth and new businesses. If Uber's revenue growth were accelerating, the three-year profit target would be more credible, but revenue growth is clearly moving in the wrong direction.

For the current year, Uber sees revenue of $10 billion to $11 billion, up from $7.78 billion a year ago, representing growth of 29% to 41%. In 2017 gross revenue growth was 85%. The rate is likely to slow again in 2019, as rideshare markets continue to mature. Investors can stomach losses from a company with blockbuster growth numbers, but once that growth slows, the music stops as the path to profitability essentially disappears.

Uber has opportunities beyond ridesharing, but aside from autonomous vehicles -- where its only advantage seems to be its rideshare network -- none of them look particularly big. Neither Uber Eats, which is trailing the $10 billion Grubhub, nor Uber Freight would justify a $120 billion valuation. Meanwhile, Lyft continues to nip at Uber's heels, gaining market share, and ensuring that prices in ridesharing remain so low that it isn't really profitable for either company.

Lyft can at least please investors by taking share from Uber. Uber, on the other hand, doesn't seem to have anywhere to go in ridesharing but down -- barring a sudden breakthrough in autonomous vehicles, which looks unlikely. The company's U.S. ridership seems to be plateauing, overall revenue growth is slowing, and its brand is still tarnished from the company's recklessness under former CEO Travis Kalanick. If Uber's IPO prices at a $120 billion valuation, it seems destined to be a flop.