An accident in Tempe, Arizona resulted in what is believed to be the first fatality of a pedestrian being hit by a self-driving car. The vehicle, which had a human operator, struck a woman who was crossing the street away from a crosswalk, according to a report in The Wall Street Journal (paywall). Uber has pulled its self-driving cars off the roads in San Francisco, Pittsburgh, Tempe, and Toronto while the accident is being investigated by the National Transportation Safety Board and the National Highway Traffic Safety Administration.

Uber CEO Dara Khosrowshahi addressed the issue in a Tweet saying, "Some incredibly sad news out of Arizona. We're thinking of the victim's family as we work with local law enforcement to understand what happened." A message from Uber Comms states, "Our hearts go out to the victim's family. We're fully cooperating with the Tempe Police and local authorities as they investigate this incident." 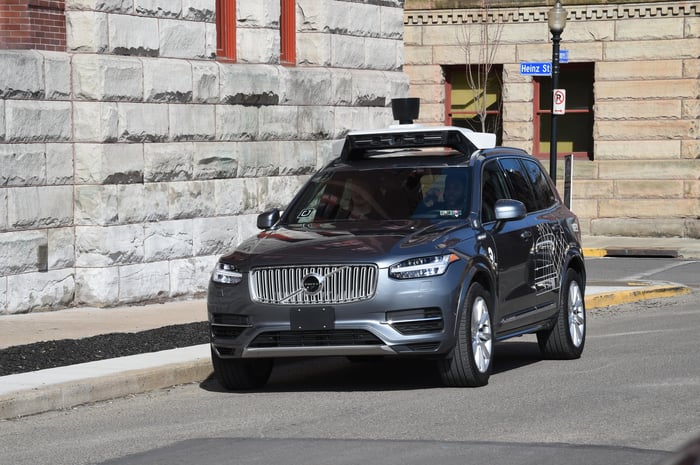 With all the self-driving test miles being clocked an accident of this magnitude was sadly inevitable and could have happened with a self-driving car from Alphabet's Waymo or General Motors Company's Cruise.

This is likely to stir an already heated debate into the safety of the autonomous driving technology.

On one side of the table

Missy Cummings, a Professor of Mechanical Engineering and Materials Science at Duke University, testified during Congressional hearings, saying "There is no question that someone is going to die in this technology. The question is when and what can we do to minimize that?"

In an article for TR News, Cummings went on to say "Significantly more research is needed in a range of areas, including sensor development, artificial intelligence and machine learning, the testing and evaluation of autonomous systems, and the legal, ethical, and public policy implications of driverless cars."

In light of the fatality, consumer advocacy group Consumer Watchdog has called for a national moratorium on self-driving car testing, saying "Uber simply cannot be trusted to use public roads as private laboratories without meaningful safety standards and regulations."

On the other side of the debate

Late last year, researchers at the RAND Corporation indicated that 37,000 people in the U.S. died in 2016 as the result of accidents in which human drivers were at fault and that more than 90% of crashes were caused by human error. The report found that "introducing autonomous vehicles when they are just better than human drivers -- as opposed to nearly perfect -- could save hundreds of thousands of lives over 30 years."

The former head of National Highway Transportation Safety Administration, Mark Rosekind echoed those thoughts at a symposium in 2016. "We can't stand idly by while we wait for the perfect. We lost 35,200 lives on our roads last year. ... If we wait for perfect, we'll be waiting for a very, very long time. How many lives might we be losing if we wait?"

This is likely to have far greater ramifications than just on Uber.

The State of California requires reports from companies that operated autonomous vehicles on its roadways, and three of the required metrics are miles driven, "disengagements" -- when the backup driver was forced to take control of the vehicle, and collisions. The most recent reporting period ran for the 12 months ending November 2017. Here's how the companies with the most mileage stacked up.

No other company even came close to the mileage generated by Waymo and GM. After a very public spat with California, Uber moved the majority of its fleet to Arizona and as a result, did not report these metrics. However, internal documents that were obtained in early 2017 show that the company drove 20,354 miles during one week in early March, and the driver was forced to take control every mile, according to a report by Recode. Those statistics, if true, don't bode well for Uber in light of recent events.

With Congress and regulators considering the extent to which self-driving cars should be allowed to operate on public roads, this accident will likely be a setback for any efforts to advance the agenda, as it will take months until the results of the investigation are completed. Until then, the fate of the autonomous vehicle industry will most likely be stalled.