Nearly everyone lives in places that need some form of air conditioning or heating at least part of the year, and that makes the HVAC systems that Watsco (NYSE:WSO) distributes and sells vital to millions of consumers. Lately, Watsco has done a good job of promoting growth by making it as easy as possible for its sales partners to get easy access to the products and systems they need to install and maintain the heaters and air conditioners that end users need.

Coming into Thursday's third-quarter financial report, Watsco investors had high hopes that the company would continue its upward trajectory. Watsco's financial results were once again quite good, but investors weren't entirely pleased with some of the clouds they see building on the horizon. 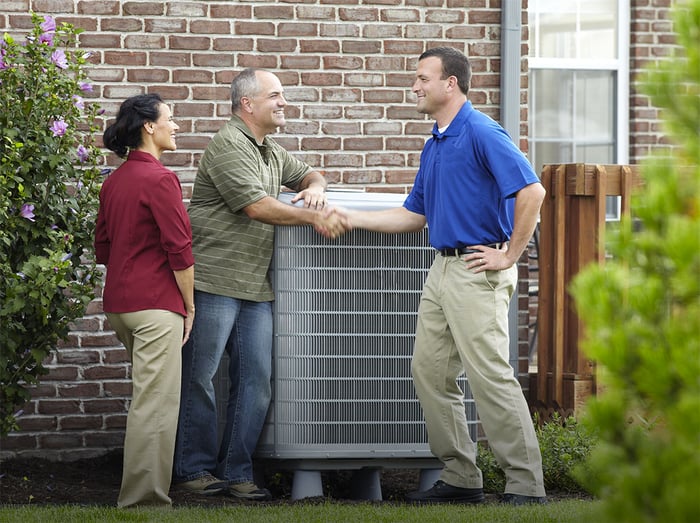 How Watsco fared in the key summer months

Watsco's third-quarter report reflected solid demand, but it wasn't quite as good as what many had wanted to see. Revenue was higher by 5%, hitting a new record of $1.30 billion, but that was still slightly slower than the 7% growth that those following the stock were expecting. Similarly, net income climbed 22% to $79.2 million, but the resulting earnings of $2.11 per share fell short of the consensus forecast for $2.26 per share on the bottom line.

Trends among Watsco's various product lines remained consistent with what investors have seen in the recent past. The key HVAC equipment segment saw the best performance, with sales climbing 7%, up slightly from the 6% growth rate that Watsco posted in the second quarter of 2018. However, sales of other HVAC products slowed to a gain of just 4%, and commercial refrigeration sales were once again unchanged from year-earlier levels.

Watsco also kept trying to do what it can to improve internal efficiency. Grozss profit was higher by 8%, reflecting a half percentage point boost to gross margin levels. Operating income climbed 7% to a record $122 million, and expansion in operating margin once again helped contribute to bottom-line performance.

CEO Albert Nahmad was generally pleased with the performance. "Strong execution was achieved in many market," Nahmad said, "and we expect to close out another record year in 2018." The CEO was especially pleased with the margin expansion that Watsco delivered during the period.

Yet Watsco pointed to some potential problem areas that investors will need to watch closely. Sales were flat in the key Florida market, which resulted in operating profit declines for Watsco's results in that state. Mexico fared even worse for Watsco, with outright sales decreases hurting its bottom line. Given how much those markets typically need HVAC systems in summer months, it could take a while before investors can confirm whether the company has successfully turned operations around there.

Nevertheless, Watsco didn't let any of those concerns dampen its overall enthusiasm. The company boosted its dividend by 10%, with payments expected to add up to $6.40 per share on an annualized bais going forward. Moreover, Watsco's essential strategy remains in place. With so much of its operations in the U.S. Sunbelt, the company relies on the hot weather and the preponderance of aging HVAC systems in the region to drive sales there.

Watsco sees the year ending well. Guidance for earnings of $6.40 to $6.50 per share for the full year reflects confidence in the HVAC specialist's ability to expand, indicating a growth rate of roughly 15% to 18%. However, investors were hoping for closer to $6.70 per share on the bottom line.

As a result of that guidance, Watsco investors didn't seem entirely pleased with the record results, and the stock dropped 4% in morning trading following the announcement. Even with some short-term bumps in the road, though, Watsco still has a solid long-term strategy that could deliver sharper growth in the future.