Shares of Amazon.com (NASDAQ:AMZN) surged higher this afternoon, on the very eve of the e-tailer's third-quarter earnings report. At 3:15 p.m., EDT, Amazon's stock is trading 7.7% higher. Earlier in the day, the gains reached as high as 7.7%. 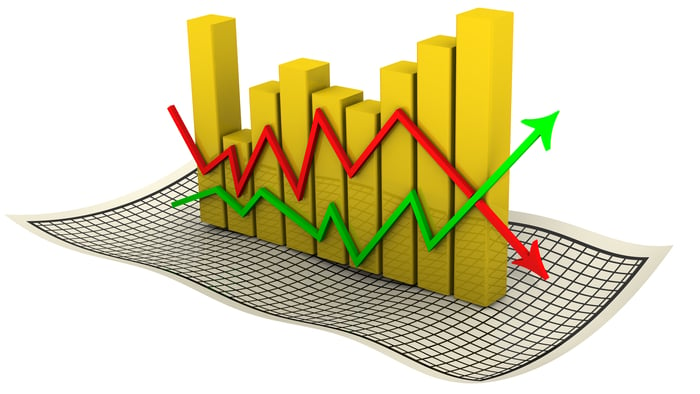 This was a sharp reversal from Wednesday's trading, when Amazon shares closed 5.9% lower on no company-specific news to speak of. Wednesday's drop simply followed the general market panic of that day as market trackers such as the S&P 500 and Dow Jones Industrial Average fell 3% lower. Sporting an above-average beta value of 1.8, Amazon often moves along with the broader market, but at an amplified pace. Such was the case yesterday.

The same story holds true today. Other than the impending earnings release, there's not much separating Amazon's stock from the general market tenor today. It's simply bouncing back faster than the Dow and the S&P 500, which are up roughly 2% each at the moment.

If basic market volatility in the last couple of days before Amazon's earnings release triggered these wild swings, it's only fair to assume that the actual report could spark an even sharper move. That move could head in any direction, of course, so it's probably best to approach this report calmly. Amazon's shares might trade significantly higher or lower tomorrow, and you don't want to get caught on the wrong side of that line with an ill-timed trade. Let Amazon reveal its latest results and set the stage for the all-important holiday season before you do anything drastic with this stock. The report is only minutes away, after all -- here's what you need to know.