EQT reported a very mixed quarter. On the one hand, adjusted earnings came in at $90.9 million, or $0.35 per share, which was well above the year-ago quarter when adjusted earnings were $17.4 million, or $0.10 per share. However, the natural gas driller's third-quarter results missed analysts' expectations by $0.13 per share. Driving the higher year-over-year profit growth was a more than 82% surge in production volumes, thanks to the acquisition of Rice Energy and the company's drilling activities.

That big uptick in output, as well as a 23% decrease in operating costs per unit of production, helped fuel a 160% surge in adjusted operating cash flow, which came in at $560.3 million during the quarter. But total costs for the quarter were $586.2 million higher than in the year-ago period. 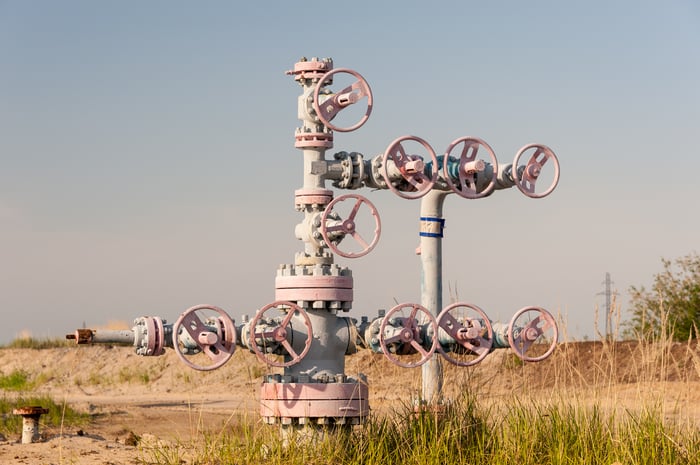 EQT also said that its estimated capital expenditures for well development in 2018 would increase by $300 million, going to $2.5 billion. Driving this increase was "inefficiencies resulting from higher activity levels, the learning curve on ultra-long [horizontal wells], and service cost increases," according to comments by management in the earnings press release.

Management wrote that the company is "committed to producing volumes in the most capital-efficient manner." Because of that, EQT plans to work at a more moderate and efficient pace, which will result in "wells coming on line later than planned in the fourth quarter." This change will push some production into 2019, which led the company to reduce its full-year forecast for 2018. However, EQT did note that it has locked in sales contracts for a third of this output at a much higher price than if it sold those volumes in October.

EQT is still working to digest its acquisition of Rice Energy, which vaulted it to the top of America's gas production leaderboard. While the company is making changes that should boost its profitability in the long term, investors want to see results. Because of that, they might want to consider buying one of these top energy stocks instead, which have done an excellent job delivering on expectations in 2018.