Shares of EQT Corporation (NYSE:EQT) are down 7.3% at 12:51 p.m. EDT on June 19, while shares of Rice Energy Inc (NYSE: RICE) are up almost 27%, following news that EQT is acquiring Rice for $6.7 billion, in a cash-and-stock deal that will create the largest natural gas producer in America when it closes. At the same time, Rice Midstream Partners LP (NYSE: RMP), the master limited partnership that owns and operates the bulk of the gathering and midstream assets that support Rice Energy's production assets, is trading down almost 28% on the news while EQT Midstream Partners LP (NYSE:EQM) is trading up 5.2%, while EQT GP Holdings LP (NYSE: EQGP) is up 11%.

The deal, which has received unanimous approval from both companies' boards of directors, will see Rice Energy shareholders get 0.37 shares of EQT for each share of Rice they own, plus $5.30 in cash. There is also $1.5 billion in long-term debt that Rice currently owes, which EQT says it will refinance as part of the transaction. 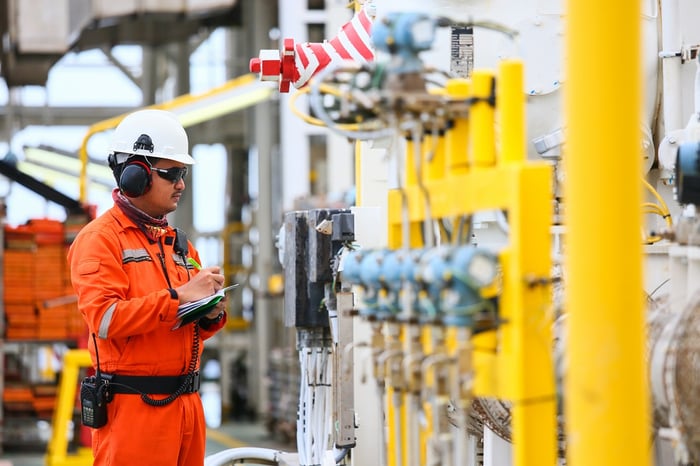 That's good for a nearly 45% increase in Rice Midstream's trailing EBITDA, and almost certainly a key reason why shares of Rice Midstream have fallen so sharply on the news. Conversely, adding those assets to EQT Midstream would increase its EBITDA 18% on a trailing basis, and that's likely driving Monday's 5% increase in its unit price. EQT GP Holdings' units are up more than twice that amount, with an 11% gain on Monday's news, as this pure-play owner of EQT Midstream Partners should see its cash flows increase even more than EQT Midstream's as a result of these asset drop downs.

EQT and Rice Energy are already two of the biggest, and lowest-cost natural gas producers in the U.S., but the leaders of both companies insist the merger of these two giants will generate ways to further increase efficiency and drive down costs. EQT says it will save $600 million in general and administrative expense once the two are combined, and $1.9 billion in "capital efficiencies." But it's going to take some time for these efficiencies to be realized, and that's after the transaction closes in the fourth quarter of 2017 at the earliest.

Whether a combined EQT and Rice will actually find $2.5 billion in cost benefit remains to be seen. But there are some factors that could help, including that the majority of the two companies' acreage is contiguous, which could drive drilling costs down and well production gains up with increased lateral well lengths.

And while this does create what (for now at least) would be the biggest natural gas producer in the U.S., it's too early to say that it will be the best or most profitable, and commodity prices will still play the biggest role in the company's results.