Shares of Goldcorp Inc. (NYSE:GG) tumbled more than 18% by 2:15 p.m. EDT on Thursday after the company reported what analysts termed a "miserable" quarter. The gold miner's stock has now fallen to its lowest level since 2002.

Goldcorp's production dropped 20% year over year to 503,000 ounces due to lower output at the company's flagship Penasquito mine. Meanwhile, the company's all-in sustaining costs (AISC) were $999 per ounce, which increased 21% from $827 per ounce in the year-ago quarter due in part to the drop in production. That combination of lower production and higher costs caused the company to report an adjusted loss of $0.08 per share, which was much wider than the $0.03-per-share loss analysts anticipated. 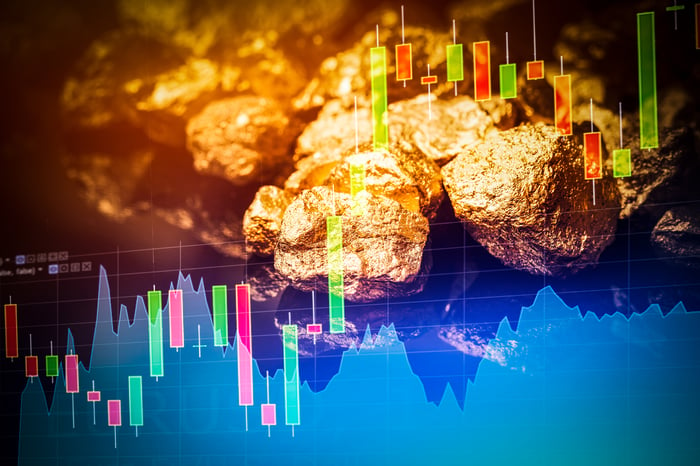 "We knew this would be a miserable quarter [but] it was a little bit weaker than most expected," said an analyst from Macquarie. Because of that, the company must deliver on expectations in the fourth quarter to prove to investors that it has reached a turning point. To do that, production would need to rise to the company's forecast of 620,000 ounces while AISC needs to drop to $750 an ounce. The company believes that's achievable since it recently finished a project at its Penasquito mine that should enable it to produce higher ore grades going forward, which would boost production and lower costs.

While Goldcorp's third-quarter results disappointed investors, the company says it remains on track to achieve its 20/20/20 plan by 2021, which would see it boost production and gold reverses by 20% while AISC falls by 20%. However, investors want to see results after a dismal quarter. That failure to deliver is why they might want to dig a little deeper into the sector's best gold stocks before considering Goldcorp.