To be clear, Alphabet insists it's pleased with the performance of its business, which now includes eight products that each boast at least one billion monthly active users.

Nonetheless, with shares down around 3% on Thursday as of this writing (albeit after a more than 4% rise on Thursday ahead of the report), let's dig deeper to see what drove Alphabet as it kicked off the second half. 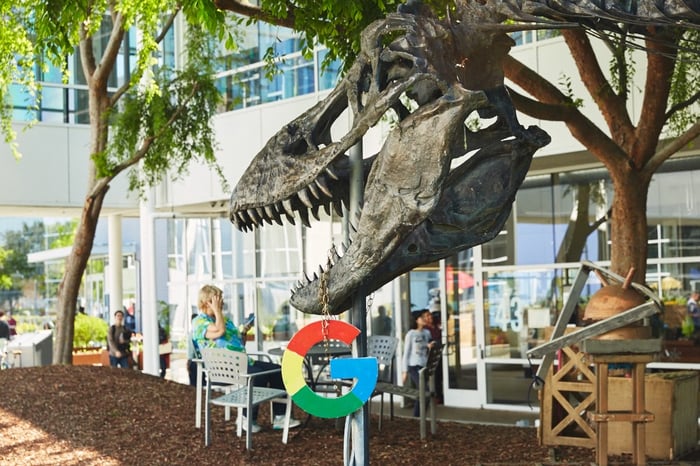 For perspective, and though we don't usually pay close attention to Wall Street's demands, consensus estimates predicted significantly lower earnings per share of $10.40 on higher revenue of $34.05 billion.

A few caveats, here: As opposed to favorable currency movements in the first half, Alphabet's top line this quarter reflects an unfavorable foreign exchange headwind that held back revenue growth thanks to the strengthening dollar. We should also note that the bottom line includes a roughly $1.38 billion gain on equity securities related to Alphabet's various investments (more on that below) -- though Alphabet still would have handily exceeded earnings expectations even without that gain.

Breaking it down further, here's how Alphabet's two core business segments -- Google and Other Bets -- each performed this quarter relative to the same year-ago period:

At Google, CFO Ruth Porat singled out the relative strength of mobile search as helping drive growth, as well as its "many [other] products that help billions of people every day."

But even that seems like an understatement. During the subsequent conference call, CEO Sundar Pichai confirmed that Google Drive officially became the company's eighth product to hit one billion monthly active users. Drive joins the likes of Google Search, Gmail, Chrome, Maps, YouTube, Android, and the Google Play store in reaching the 10-figure milestone.

Zooming in further, paid clicks on Google properties jumped 62%, and cost per click -- a metric that helps show how much Google makes per ad -- declined 28%. As I suggested in my earnings preview yesterday morning, the latter decline is largely driven by outsized growth from YouTube, where ads tend to monetize at lower rates. Outside of Google's properties, impressions on network members' sites grew 1%, and cost per impression rose 11%.

Finally, Google's non-advertising revenue increased 29.2% year over year to $4.64 billion, led by Cloud and Play. Pichai elaborated during the call that the Made By Google hardware line made only a "modest" contribution to growth, primarily as Google launched its new family of hardware products just in time for the holiday season. Still, in the meantime, daily active users of Google Home devices have soared more than five fold over the past year.

As expected, Google's Other Bets segment remained profoundly unprofitable, with an operating loss of $727 million -- a testament to many of its high-potential businesses remaining in their early (read: pre-revenue) stages.

Alphabet once again declined to provide specific forward financial guidance. But Porat did remind us that cost of sales will rise in the fourth quarter, driven by the seasonal trends of the hardware business, as well as planned content acquisition costs for YouTube. Sales and marketing also tend to be skewed more toward the back half of each year, particularly during the holidays. She also insisted that Alphabet's strategic investments will be carefully calculated with long-term growth in mind, while capital expenditures will continue to reflect infrastructure investments, including "a number of data center construction projects in-flight as well as ongoing expansion in our compute capacity."

Fair enough. In the end, putting aside Alphabet's currency-driven revenue shortfall, it's clear that Alphabet is firing on all cylinders as it continues to expand its already astounding reach. And it's equally unsurprising that, as I wrote this take, shares have already recouped the bulk of their early losses.