Shares of Western Digital (NASDAQ:WDC) plunged on Friday after the provider of hard drives, solid-state drives, and NAND memory chips reported its fiscal first-quarter results. The company missed analyst estimates across the board and announced plans to reduce its planned flash output in 2019 due to oversupply. As of 10:45 a.m. EDT, the stock was down about 21.6%.

Western Digital reported first-quarter revenue of $5.03 billion, down 3% year over year and $110 million below the average analyst estimate. The company blamed declines in flash pricing for the revenue drop, citing a challenging global business environment. 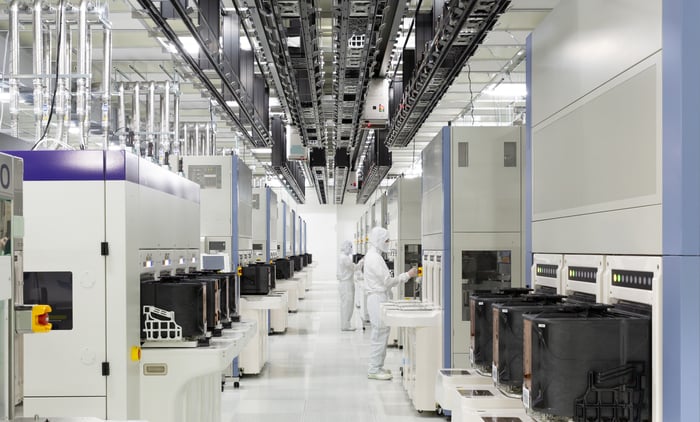 Non-GAAP earnings per share came in at $3.04, down from $3.56 in the prior-year period and $0.02 below analyst expectations. The company expects to produce revenue between $4.2 billion and $4.4 billion in the second quarter, along with non-GAAP EPS between $1.45 and $1.65. Western Digital reported revenue of $5.3 billion and non-GAAP EPS of $3.95 in the prior-year period, so both pieces of guidance represent steep declines.

Western Digital is taking steps to address weak flash pricing. The company plans to begin reducing its wafer output starting in its fiscal third quarter, in hopes of better aligning its supply with market demand for flash memory. Western Digital expects total bit output in calendar year 2019 to decline by 10% to 15% as a result.

The company plans to take one-time charges totaling as much as $300 million over the course of fiscal 2019 related to these capacity reductions.

The memory chip business goes through cycles. Just as Western Digital rode this cycle on the way up, it will ride it on the way down. This is a good time to point out that ultra-low price-to-earnings ratios for cyclical stocks can be deceptive. Western Digital now trades for less than three times its fiscal 2018 non-GAAP earnings, but that multiple means squat with earnings set to plunge. The company expects its non-GAAP earnings to plummet by 60% in the second quarter.

The flash memory market will eventually turn the corner, with supply being slashed enough to bring things back into balance. Until that happens, expect dismal numbers from Western Digital.