Later this month, Apple (NASDAQ:AAPL) is expected to introduce updated versions of its iPad Pro tablets. The devices are expected to be radically redesigned compared to their predecessors, sporting screens with dramatically smaller bezels and the elimination of Touch ID (and the home button) in favor of the company's facial recognition technology, known as Face ID, that first made its debut in last year's iPhone X.

The devices will certainly get a lot of press. Frankly, they'll probably be great products that could give the company's iPad business a boost in the coming quarters. However, before getting too excited about these new iPads and the effect that they could have on the business, it's helpful to have an understanding of just how unimportant the iPad product category is to Apple's overall financial performance. 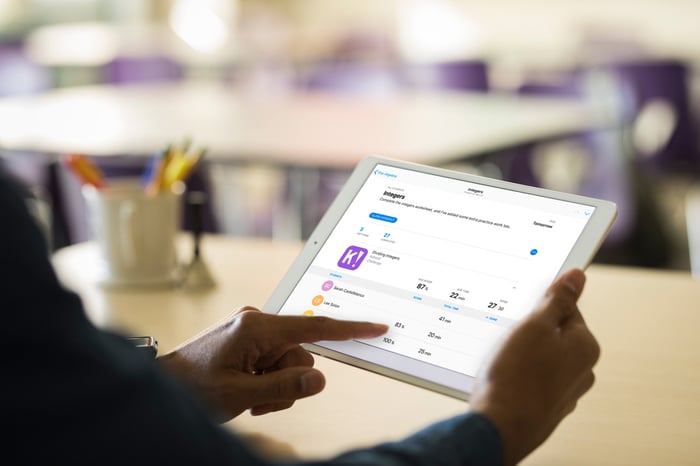 Small and getting smaller

Apple's iPad business peaked during the company's fiscal year 2013, with unit shipments totaling more than 71 million and sales coming within spitting distance of $32 billion. That year, the iPad made up roughly 18.7% of the company's annual revenue.

In the years that followed, though, Apple's iPad business suffered a string of unit shipment and revenue declines. When Apple turned in its fiscal year 2017 results, it reported that it sold just under 43.8 million iPads, generating $19.2 billion in revenue along the way. Apple's iPad business made up just under 8.4% of the company's revenue in that year.

While Apple doesn't report its full fiscal year 2018 results until Nov. 1, the iPad business became even less important during the first three quarters of the year. Even though Apple reported a 2% rise in iPad revenue during that time, Apple's overall revenue grew at a more robust 15% rate, thanks to the iPhone business delivering 15% revenue growth, services turning in 27% growth, and sales of "other products" (including the Apple Watch, AirPods, HomePod, and so on) surging 37%.

As a consolation prize, iPad wasn't the slowest-growing of Apple's businesses during that time -- that honor went to the company's Mac business, which saw revenue shrink 3% in the first three quarters of fiscal year 2018. (That being said, Apple's Mac business still brought in more absolute revenue than the iPad business did.)

It should go without saying that Apple is better off having its nearly $20 billion in annual iPad revenue than not having it. The iPad is also an important part of Apple's overall computing ecosystem. That's why investors should expect Apple to keep investing in building new iPad hardware, cultivating the iPad app ecosystem, and working to increase adoption of the iPad across various industries.

If Apple can keep the iPad business at least flat, then it wouldn't detract from the revenue growth that its other businesses deliver. And if Apple can actually put this business on a growth track -- even if that growth is modest -- that would be even better.

With that all being said, I just don't think the performance of the iPad business is, or should be, at the forefront of investors' minds -- nor should it affect anyone's long-term outlook on the company.