Please ensure Javascript is enabled for purposes of website accessibility
Log In Help Join The Motley Fool
Free Article Join Over 1 Million Premium Members And Get More In-Depth Stock Guidance and Research
By John Ballard - Oct 28, 2018 at 7:19AM

The leader in PC accessories continues to see exploding demand for gaming mice and keyboards.

Logitech International (LOGI 4.48%) has been riding a tidal wave of demand for its gaming products. The rising popularity of esports and online competitive gaming have played into the hands of the leader in computer peripherals. The company's fiscal second-quarter 2019 results (three months ended Sept. 30, 2018) didn't disappoint, with strong growth in gaming products leading it to 9% year-over-year growth in sales and 26% growth in non-GAAP earnings per share.

Ever since CEO Bracken Darrell took over in 2013, Logitech has been more focused on design and innovation, which continues to pay off. While gaming has emerged as Logitech's largest sales category, other areas of the business, such as video collaboration and other accessories, turned in credible results as well.

The following is a review of the most important highlights from Logitech's second-quarter report. 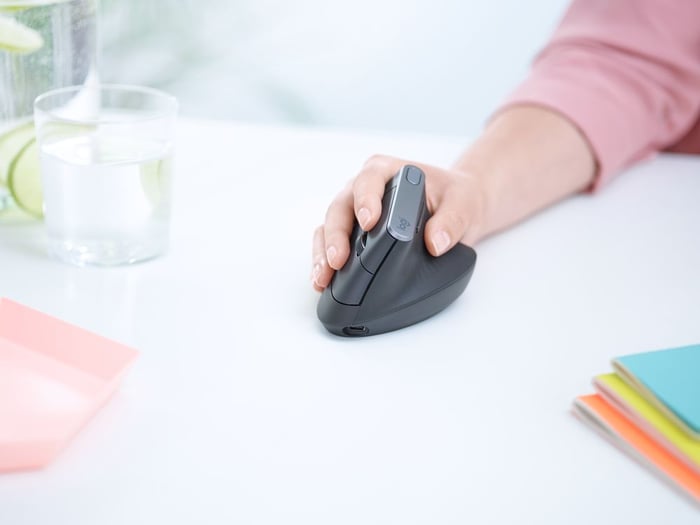 Logitech's design and innovation prowess, as seen in its MX Vertical ergonomic mouse, has ignited demand for its products. Image source: Logitech International.

Logitech's largest sales category is gaming, and it continues to produce stellar growth for the company. In the second quarter, gaming revenue grew 41% year over year, which follows 44% year-over-year growth in the prior-year quarter. Popular online competitive games, including Fortnite and Activision Blizzard's Overwatch have driven incredible demand for gaming mice, keyboards, and headsets.

In the first quarter of fiscal 2017, gaming generated $57 million in sales and represented 12% of Logitech's total business. In the most recent quarter, sales of gaming products generated $161 million and represented 23% of total sales. With the big game companies investing more in competitive multiplayer titles, Logitech's gaming business may just be getting started.

Here's what CEO Bracken Darrell had to say about the state of the gaming market:

More and more gamers have broadcast themselves, playing their favorite games as a way of expressing who they are and interacting with other gamers on other social platforms and that's unlocking new opportunities for us. And so, with the gaming becoming increasingly pervasive across the mainstream, we're doubling down and investing more to drive for continued momentum in our gaming businesses.

"Broadcast" refers to sites like Amazon.com's Twitch and Alphabet's YouTube Gaming, where gamers go to watch others stream their gameplay. Some industry research estimates that more people watch game-streamers than the total combined viewership of Netflix, Hulu, HBO, and ESPN.

Game-streaming helps attract more people into the gaming fold, and it's turning gaming into a social activity. The latest results show Logitech continuing to reap the rewards of these trends.

Video collaboration has space to grow

Logitech's video collaboration business also stood out during the quarter. Though it comprised only 8% of net sales, it's one of the company's fastest-growing categories. Video collaboration sales grew 24% year over year in the last quarter. This is expected to be a long-term driver of Logitech's growth, as management estimates that only 2.5% of the world's conference rooms are equipped with video devices.

Darrell believes video collaboration could be expanding faster. It's a matter of hiring "the right sales people around the world," he stated during the second-quarter conference call. Darrell also pointed to the growth in the number of meeting minutes conducted over Zoom, a video-conferencing solutions company Logitech has partnered with. Zoom has experienced 50% growth in meeting minutes conducted over its platform since the end of 2017, which speaks to the demand Logitech is seeing in its video collaboration business.

While gaming and video led the charge, smaller categories performed well for the most part over the last three months. Logitech has experienced slow but steady growth in pointing devices, general-use keyboards, and PC webcams. Sales from these products improved by 8%, the fastest growth in this category in six quarters. However, sales of mobile speakers, audio and wearables, and smart-home products declined.

Management isn't concerned about declines in some of the smaller categories. Executives view Logitech as a portfolio of categories in which they shift resources to whichever product group has the best growth potential. And right now, the highest potential clearly lies in gaming and video conferencing.

The good news for investors is that Darrell believes Logitech could be performing much better. As he elaborated:

There are areas in our business and they're not small. Two or three that I think, gosh, we should be really outperforming where we are. And so we're really doubling down the innovation there to see if we can put ourselves in place to do that.

Logitech shares are down about 25% over the last three months, but this isn't necessarily the result of the company's recent performance. It's more likely that this is a temporary breather for a stock that has soared 278% over the last five years.

The second quarter provided further validation that Logitech's growth story is intact, and it remains a stock investors should consider for the long term.