Please ensure Javascript is enabled for purposes of website accessibility
Log In Help Join The Motley Fool
Free Article Join Over 1 Million Premium Members And Get More In-Depth Stock Guidance and Research
By Daniel B. Kline - Oct 28, 2018 at 7:16AM

The company's COO laid out the problem and his company's plans in a keynote speech at Money 20/20 in Las Vegas.

"More than 50% of small businesses are locked in the physical world even though consumers are turning to the digital worlds for their needs," said PayPal (PYPL 1.87%) COO Bill Ready in his keynote speech at Money 20/20. "And every day you see the uneven benefits of digitization."

"We know that when we open the digital economy for them [small businesses] we can help them create more opportunity, jobs, and growth," he said. "Even though we're helping over 20 million businesses all over the globe -- mostly small businesses -- I know we still aren't doing enough to put the right tools in the hands of the people who need it the most." 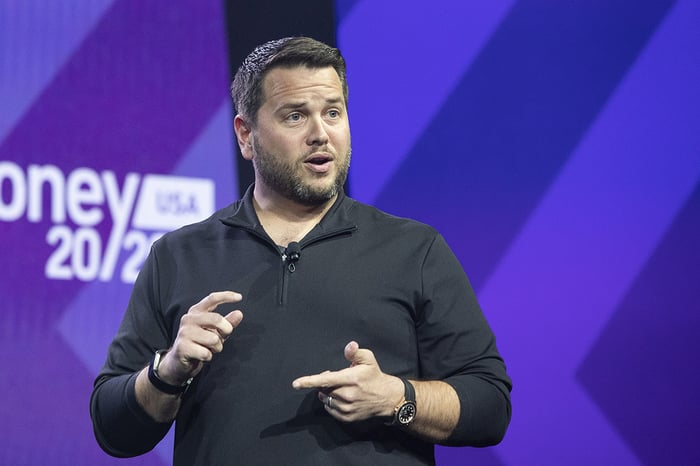 How does PayPal see the problem?

Ready grew up in a family that owned a small business -- an auto repair shop in a small town in Kentucky. He still regularly talks to small business owners -- many who are not participating in the digital economy -- and that's what has convinced him that more needs to be done.

One thing Ready learned was that PayPal had made the mistake of keeping its platform walled off, "a bit of a closed platform that was hesitant about partnerships," he said. "But not anymore. PayPal has opened our platform. We've been on a journey to connect with other industry leaders."

That, he added, has accelerated growth for his company and its partners. "U.S. small businesses using PayPal grow at 23% year-over-year while traditional businesses see about 8% growth," Ready said.

Ready wants to further accelerate that growth by giving merchants of all sizes access to the tools that have generally only been available to larger companies. That includes helping small businesses connect with customers online, on mobile, and through social media.

What is PayPal going to do?

PayPal plans to keep working on bringing mobile payment and related services to small businesses that currently lack that capacity. One concern PayPal is addressing is how small businesses get their money in a digital economy.

That has changed in the digital economy. Small businesses see money from a sale several days, if not weeks later.

"That doesn't make any sense," Ready said. "The technology should make it easier to get money, not harder. ... Immediate access to money is critical for small business."

PayPal is working on the problem. "We can make sure that small businesses have better and faster access to their money," Ready said.

The other issue Ready's company is working on is access to capital. That involves disrupting the traditional bank-based small business loan process that's generally based on lending against physical assets.

"In the digital world, there aren't always physical assets to lend against," Ready said. "And most lenders are used to lending to businesses that have a brick and mortar presence or a history of success. It's tough for entrepreneurs and small businesses."

To address that, PayPal is using the data it has from its small business customers -- their transaction history, invoicing, and other financial records -- to make loans. That takes a process that has traditionally been paperwork-heavy and very cumbersome and made it a near-instant process.

"The number of traditional bank loans declined 15% between 2005 and 2016," he said. "It's not that banks don't want to lend. It's just that the kind of information that they need to make lending decisions is different than it used to be."

PayPal has been working on changing that both by lending on its own and through partnering with banks to give them access to the data they need. That, the COO said, has helped more than 170,000 businesses globally receive more than $6 billion in loans.

"We know we can't do it alone," Ready told the Money 20/20 audience. "We know it's going to take all of us to empower main street."

The COO implored the crowd, which contained many top-tier executives in the payments, financial technologies, and financial services sectors, to work together to improve access to capital to businesses of all sizes. Doing that, he explained, will create "a vibrant small business ecosystem" that "contributes to a more diverse and inclusive world. Together we can make sure that access to capital is not a barrier to entrepreneurs and their dreams."