It's been a year of challenges and transition for Starbucks (NASDAQ:SBUX). After hitting all-time highs in May 2017, the stock has struggled, plunging to lows not seen in more than three years. Falling same-store comps and slowing revenue growth have plagued the coffee purveyor, and several C-suite changes haven't helped matters.

All eyes will be on the numbers when Starbucks reports its fiscal fourth-quarter and full-year financial results after the market close on Nov. 1. Let's take a look at recent events and see what the future holds for the coffee-house king. 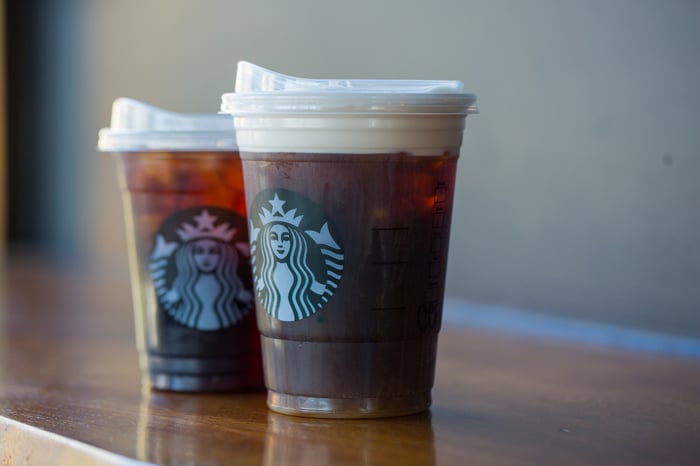 For the third quarter, Starbucks reported record revenue. While that might seem like a notable accomplishment, sales of $6.3 billion grew just 11% year over year, while earnings per share of $0.61 climbed 13% compared to the prior-year quarter. Even more disappointing were the company's global comparable-store-sales, which grew just 1% year over year, and were far below the 3% to 5% increase management was expecting. In addition to the besieged comps, Starbucks saw a 2% decline in total transactions and a 3% decrease in the average ticket price.

A number of factors contributed to the less-than-stellar results. Consumers have been doing without their afternoon pick-me-up, causing slowing growth in blended Frappuccino beverages, which have long been a pillar of Starbucks' offerings. These frozen concoctions had long been a hit with coffee drinkers during the dog days of summer and were one of the company's biggest sellers. Starbucks also decided to close its stores across the country to conduct anti-bias training, and the company said the two factors drove same-store sales down by 3 percentage points. The company also suffered disappointing results in China, one of its biggest growth markets, which saw comparable store sales that declined to 2%.

Another issue weighing on the minds of stockholders is the recent departure of previous chairman Howard Schultz and the announced retirement of CFO Scott Maw, who will be stepping down in November.

Starbucks has taken a number of steps to improve its overall trajectory. The company has been taking advantage of the current stock price weakness and is planning to return $25 billion to shareholders through share buybacks and dividends through fiscal year 2020, having achieved $5 billion in returns over the prior three quarters.

The company has also embarked on a plan to cut costs, improve operational efficiency, and invest it growth. During the third-quarter conference call, Maw said the company expects to achieve 35% to 40% of those savings in fiscal year 2019.

Starbucks said same-store sales for the fourth quarter would come in at the low end of the 3% to 5% range it anticipated and full-year comps would be "just below" the range. For the full year, management expects revenue growth in the high-single-digits, excluding a 2% hit from the integration of its East China acquisition, and earnings per share of about $3.27 at the midpoint of its guidance.

Analysts' consensus estimates are calling for revenue of $6.28 billion for the quarter, which is an increase of 10% year over year, and earnings per share of $0.60, up 9% compared to the prior-year quarter. Those expectations might be unrealistic, setting shareholders up for another disappointment.

Challenges remain and investors will be extremely interested to see if Starbucks has made any progress toward its goals when the company reports earnings on Nov. 1.

Can Starbucks Right the Ship When It Reports Earnings? @themotleyfool #stocks $SBUX Next Article
Current