Shares of open-source software vendor Red Hat (NYSE:RHT) jumped as much as 59.6% higher on Monday morning due to a $34 billion buyout offer from IBM (NYSE:IBM). Big Blue's stock fell as much as 5.2% for the same reason. As of 1 p.m. EDT, IBM shares recovered to a 3% decline, while Red Hat was trading 43.3% above Friday's closing price.

IBM dropped an all-cash offer for Red Hat on Sunday night, pledging to pay $190 per share, or roughly $34 billion in total. The deal is expected to close in the second half of 2019, financed by a combination of new debt and IBM's cash reserves, and is subject to the usual battery of regulatory approvals and a thumbs-up vote from Red Hat's shareholders. 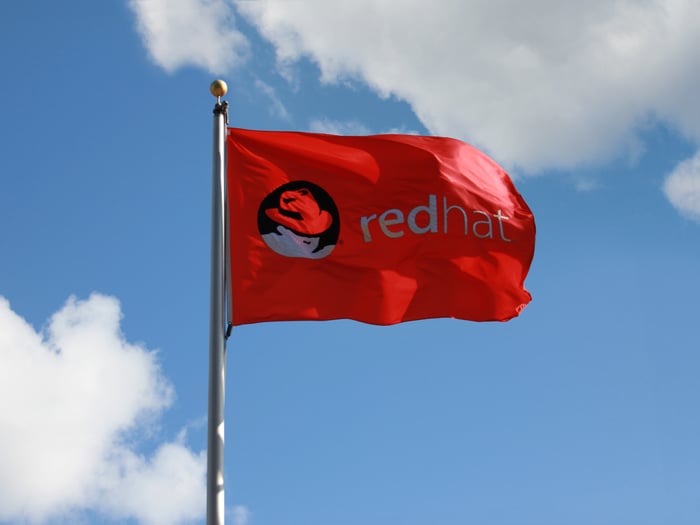 IBM's management expects the Red Hat buyout to establish Big Blue as a market leader in the hybrid cloud-computing market, where bare metal is mixed with off-site cloud systems as appropriate.

"Research shows that 80 percent of business workloads have yet to move to the cloud, held back by the proprietary nature of today's cloud market," according to the joint press release. Locking down a dominant position in that growing opportunity's early days makes a lot of sense. I say that as a longtime shareholder of both companies.

The open-source community most definitely has a big hitter firmly on its side now. An immediate response from the Linux Foundation applauded the merger, calling it "a tremendous opportunity for both organizations" and a win for open source in general.

"We believe IBM will be a good steward of Red Hat and look forward to continuing to collaborate with both Red Hat and IBM," said Jim Zemlin, Linux Foundation executive director, in an emailed statement.

The market reaction added $8.9 billion to Red Hat's market value while taking $3.4 billion away from IBM's, which adds up to a total value creation of $5.5 billion.