Please ensure Javascript is enabled for purposes of website accessibility
Log In Help Join The Motley Fool
Free Article Join Over 1 Million Premium Members And Get More In-Depth Stock Guidance and Research
By Dan Caplinger - Oct 30, 2018 at 9:27AM

The payment network giant is maintaining its momentum toward a cashless world.

Cash might be king, but at least in Mastercard's (MA 1.19%) eyes, cash is in a great position to get dethroned. The payment processing company has worked hard to bolster the success of its payment processing business, with impressive performance from its credit and debit card division over the past few decades gradually giving way to more advanced payment technologies. Even though the entire industry has done pretty well, many see Mastercard as having competitive advantages that not even its biggest rival can overcome.

Coming into Tuesday's third-quarter financial report, Mastercard investors wanted to see its impressive trend of growth continue. The payment processor's results lived up to those expectations, and many see the future only getting brighter for Mastercard if it can stay on the strategic path that it's plotted for itself. 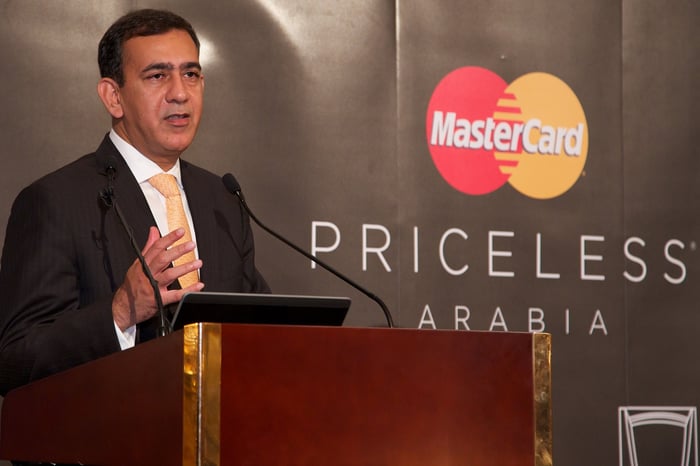 Mastercard's third-quarter results kept up the impressive pace of gains that investors have gotten used to seeing. Net revenue of $3.90 billion hit a new record, rising 15% from year-earlier levels and outpacing the anticipated $3.86 billion on Mastercard's top line. Adjusted net income climbed 30% to $1.86 billion, and that produced adjusted earnings of $1.78 per share, topping the consensus forecast among investors by $0.10 per share.

Fundamentally, Mastercard sustained its past successes. Gross dollar volume climbed 13% in local-currency terms to $1.47 trillion, split roughly equally between its credit and debit programs. Switched transaction counts of 18.8 billion was higher by 16% after taking into account the deconsolidation of the company's business in Venezuela. Cross-border volume climbed 17% in local currency, although a strong dollar cost the company about two percentage points of revenue growth as reported. Mastercard has issued about 2.5 billion cards under its own brand as well as the Maestro name.

Mastercard also did a good job of reining in costs. Total operating expenses were up just 11%, with only a 9% rise in overhead costs that helped to boost profit margin figures. Income tax expense also fell precipitously, contributing $137 million to bottom-line gains.

As we've seen in past quarters, Mastercard did better abroad than in its home market, even with some currency-related issues. Gross dollar volume growth internationally came in up 13% even with 6 percentage points of currency pressure, outpacing the 9.5% rise in the U.S. market. Purchase volumes and transaction counts showed similar disparities, further indicating that the bulk of Mastercard's most lucrative potential business seems to lie outside the confines of the domestic market.

Can Mastercard keep charging ahead?

CEO Ajay Banga explained what he sees as Mastercard's strengths. "Our business wins and new partnerships, strengthened by our differentiated services offerings," Banga said, "are helping drive our global momentum." The CEO expects that investing for the long run will keep producing solid growth well into the future.

Stock repurchase activity has also remained at a fevered pitch. In the past quarter, Mastercard bought back about 5.6 million shares. The company spent $1.2 billion to do so, showing its commitment to buybacks even as the stock price has risen sharply. Add in $260 million in dividends and another $385 million in repurchases in the opening weeks of the fourth quarter, and Mastercard investors are seeing a lot of capital returned to them. Moreover, they can expect the company to authorize even more buybacks once the remaining $800 million in authorized repurchases gets used up.

Mastercard investors were happy with the results, and the stock gained 2% in pre-market trading following the announcement. As long as the war to replace cash continues to go well, Mastercard will remain at the forefront of the payment processing revolution as it stakes its claim on the fast-growing industry.