Walmart (NYSE:WMT) may have found its stride in e-commerce -- and its namesake stores have been bringing in higher profits, too -- but its Sam's Club warehouse chain just hasn't been keeping up.

During a period when niche leader Costco (NASDAQ:COST) has been delivering steady membership and sales growth, Sam's Club has struggled, to the extent that the company announced earlier this year that it would close 63 underperforming stores.

In an effort to remedy what ails it, executives have decided they'll need to make major changes to Sam's Club's in-store shopping experience. And to field-test those, the company has been building a prototype store that will function as a sort of retail laboratory.

"There won't be another club like it," wrote Executive Vice President Jamie Iannone in a blog post. "It will be a mobile-first shopping experience powered by the new Sam's Club Now app. At its core, Sam's Club Now will be a technology lab that doubles as a live, retail club."

That club, which was announced in June, is about to launch, and it offers a number of insights into what the chain's current plans are. There's no guarantee any of these ideas will make it to your local Sam's Club, of course, but the concepts the company is testing show how it's leaders are thinking. 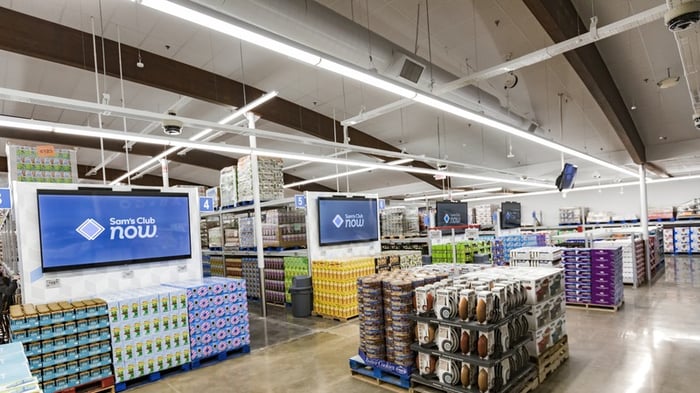 The core bargain between warehouse clubs and their members has always been a no-frills arrangement -- management spends less on staff, merchandising, and non-essentials; customers get cheaper prices.

Sam's Club is looking to revise that standard a bit. In its Dallas-area test store, it will debut a couple of major changes to the model. The first aims to address a central problem with warehouse shopping -- customers' difficulty getting help when they need it.

"Our associates are key to bringing this experience to life, which is why we're introducing a new role called the Member Host," wrote Iannone. "Think of these associates as the concierge of the club. We'll empower them with new technology that will allow them to serve members better and faster."

In addition, Sam's Club also will test upgrades to its Scan & Go technology, which allows customers to use the chain's app to bypass the checkout line. More than 90% of members who've tried the technology have used it again, Iannone wrote. Among the features being added are:

Other technology will be deployed for testing at the site as well, including electronic shelf labels that will instantly update prices, and a network of cameras that will help the company track inventory.

Sam's Club doesn't have all the answers, but it's clearly trying to improve the customer experience -- something  that has always been a weakness for warehouse clubs in general. Technology may offer it a lower-cost way to add some frills to the bare-bones model, which could (probably after many tweaks) give it an edge as it tries to make up some ground on Costco.

While it's impossible to guess if any of these changes will help it entice a significant number of consumers away from its rival, at the very least, some of them should help Sam's Club with member retention and satisfaction, and drive an increase in visits.