Shares of online study resource provider Chegg Inc. (NYSE:CHGG) have been as fraught and volatile over the last five weeks as a college freshman's initial semester exam trajectory. Following the disclosure of a security breach on Sept. 26, Chegg stock gradually relinquished nearly 30% of its value but reversed course when the company's third-quarter earnings results were issued on Oct. 29.

The "CHGG" symbol has gained 18.5% in the two trading sessions following the report's release. Below, we'll review highlights from the quarter and the factors behind investors' renewed optimism on the content and tutoring organization's prospects: 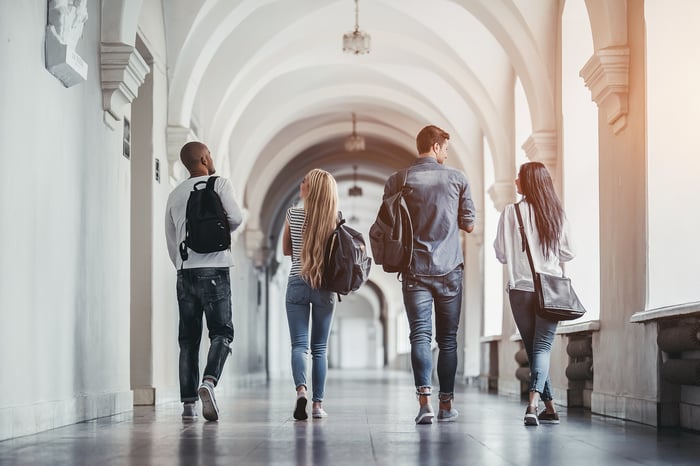 Chegg's management team is optimistic heading into 2019. CEO Dan Rosensweig confirmed that the company now is testing a long-awaited subscription bundle of various Chegg services that will likely increase both revenue and the company's total addressable market. In his prepared remarks on the third-quarter earnings call, Rosensweig also discussed the reception of new products and legacy enhancements:

While we are investing in our core, we are also investing in our future. We are seeing strong initial demand for our new subscription services, Chegg Math, and an enhanced version of Chegg Writing. With over 40% of college students requiring remediation in math, English, or both, these are key subjects where we are starting to leverage AI and machine learning to expand our product offering and provide greater support to a broader range of students. Last quarter, we launched our Math product on mobile to provide students increased access to help when and where they want it. Chegg Writing now addresses more pain points around the subject of writing, including plagiarism, grammar, sentence structure, and more.

Due to an extremely strong fall season, management increased both fourth-quarter and full-year guidance -- its third upward revision this year. For 2018, the company anticipates total revenue of $315 million-$318 million versus the range of $306 million-$311 million issued last quarter.

Additionally, the company unveiled revenue and earnings targets for 2019. These include revenue of $388 million (18% growth beyond expected 2018 revenue at the midpoint of the current targeted range), which will be sustained through an expected annual growth rate of 30% in Chegg Services. Gross margin is pegged at 75% for the year, and adjusted EBITDA is expected to crest to $112 million. If 2019 follows the current-year pattern, these estimates simply may serve as starting points for eventually higher targets.