Please ensure Javascript is enabled for purposes of website accessibility
Log In Help Join The Motley Fool
Free Article Join Over 1 Million Premium Members And Get More In-Depth Stock Guidance and Research
By Matthew DiLallo - Nov 1, 2018 at 11:49AM

Investors liked what they saw after looking past the headline number.

On the one hand, HighPoint Resources' third-quarter results were a bit of a disappointment after the driller reported an adjusted profit of only $0.01 per share, which missed the consensus estimate by $0.01 per share. However, investors were able to look beyond that headline miss to see the company's strong operational results in the quarter. 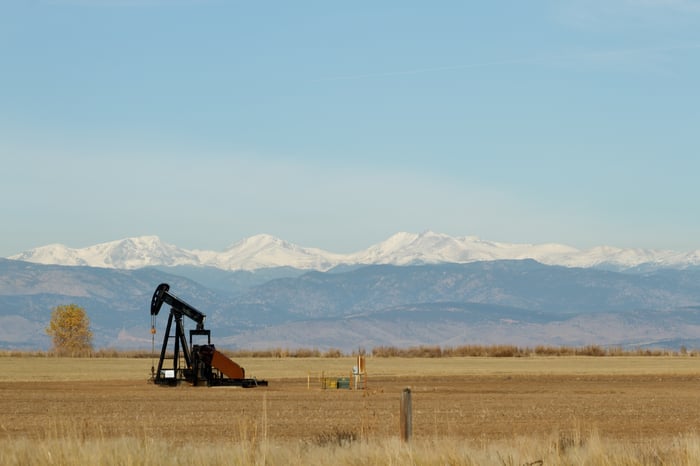 One of the highlights was production, which surged 43% year over year thanks to the company's strong drilling results. Early production data from initial drilling in the Hereford Field was especially promising, as recently drilled wells produced high rates of oil, which validates the company's belief that it can transition to full-field development. HighPoint Energy believes that this region can be an oil growth engine in future quarters.

Meanwhile, the company also noted that its margins expanded 44% driven by an increase in oil production, higher oil prices, and lower operating costs. One other factor that helped boost margins was the commissioning of DCP Midstream's (DCP 2.41%) Mewbourn 3 gas processing plant. The addition of that new infrastructure, as well as HighPoint Resources' strategic shift to diversify its gas processing exposure away from DCP Midstream, will improve its flexibility and should limit future midstream constraints, which impacted its results in the past.

"We are well positioned to generate a strong growth profile with a dominant acreage position in the oily and rural areas of the DJ Basin," stated CEO Scot Woodall. The company currently believes that its oil volumes will expand nearly 20% during the fourth quarter while continuing to increase at a healthy pace in 2019, which puts the company on track to become cash flow positive by the second half of next year as long as oil averages at least $55 a barrel. That upcoming upside makes HighPoint Resources look like an interesting stock for investors seeking oil-fueled growth.