Please ensure Javascript is enabled for purposes of website accessibility
Log In Help Join The Motley Fool
Free Article Join Over 1 Million Premium Members And Get More In-Depth Stock Guidance and Research
By Lou Whiteman - Updated Apr 14, 2019 at 10:16AM

The oil driller is up despite legislation in its home state that would seemingly make it harder for energy companies to operate there.

Shares of oil driller HighPoint Resources (HPR) jumped 10.2% on Monday, despite the advancement of legislation in its home state, Colorado, that would restrict oil and gas operators in the state. The reason that the shares are up might have something to do with the details of the legislation, and HighPoint's area of operation.

A controversial bill that would alter how Colorado issues permits for oil and gas drilling, by expanding local government authority over drilling sites, has passed the Colorado Senate in a close 19-15 vote. The bill, which aims to focus more on issues like climate change, pollution, and threats to wildlife when deciding on drilling, is similar to a state ballot proposal to limit drilling that was rejected by voters back in November.

The legislation now heads to the Colorado House, where it is expected to pass; it would then go to Colorado governor Jared Polis for consideration. 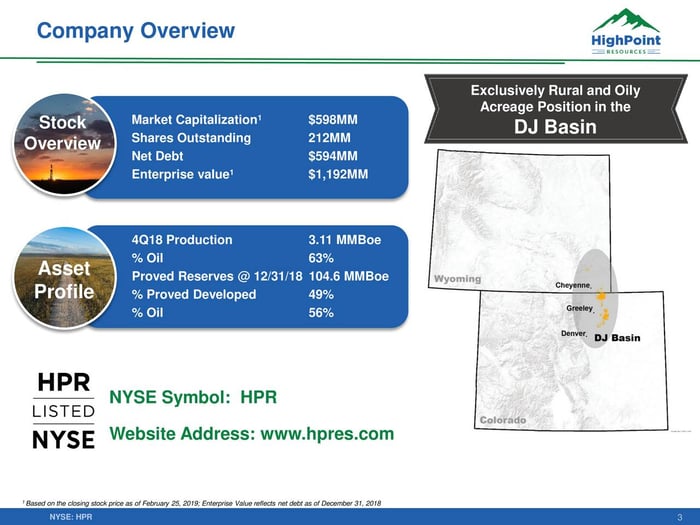 HighPoint, which has almost all of its operations in Colorado, would seemingly be vulnerable if the legislation becomes law. But on a Feb. 27 call with investors, company officials downplayed the concern, with CEO Scot Woodall pointing out that most of HighPoint's acreage is located in rural areas outside of municipality boundaries; he also said that the company's drilling program for 2019 is fully permitted, and "we expect it to be extremely resilient to potential regulatory developments in Colorado."

Check out the latest earnings call transcript for HighPoint Resources.

HighPoint had a great day on Monday, but the stock is still down 46% over the last 12 months. The company also has more than $600 million in debt on its balance sheet, and expects at least $350 million in capital expenditures during the current fiscal year.

Even in the worst-case scenario, HighPoint seemingly has some time. If the governor signs the legislation into law, there will be months of public hearings as the rules are implemented. Still, this is a situation investors should continue to monitor closely.