Facebook (NASDAQ:FB) has three different Stories products that have all grown very popular very quickly. There are 1.15 billion daily users across Instagram Stories, WhatsApp Status, and Facebook Stories. And 1 billion of them are sharing new content every day, according to CEO Mark Zuckerberg.

In just two years, Facebook went from zero to 1 billion. By comparison, it's been five years since Snap (NYSE:SNAP) introduced Stories in Snapchat, and it has just 186 million daily users across the entire app.

But as Stories become a bigger part of Facebook, the transition could prove challenging. If Snap's financial results are any indication, Stories can be harder to monetize than the Feeds found on Facebook and Instagram. Management set expectations for investors in Facebook's third-quarter earnings call. 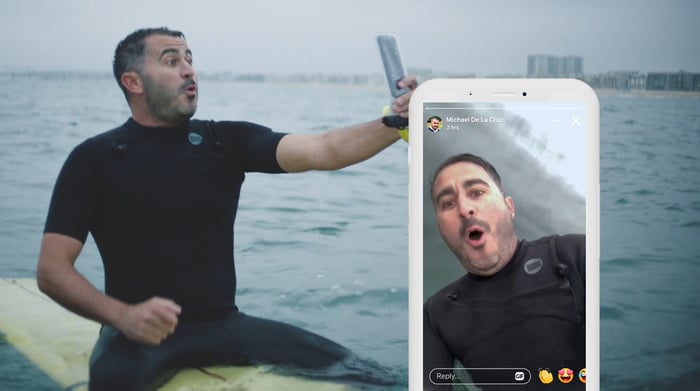 Not a smooth transition

On the call, Mark Zuckerberg lamented some missteps with Facebook Stories. "Our effort to shift Facebook from News Feed first to Stories first hasn't been as smooth as I'd hoped," he said.

Facebook Stories is the least popular of Facebook's three Stories products, but it has gained momentum since merging with Messenger Day, the original Stories product for Messenger. Users across the two apps doubled in the four months between May and September.

When asked why Facebook Stories started slower than the Instagram and WhatsApp products, Zuckerberg pointed out the product launched several months later. "And then the initial version of what we shipped, I just think wasn't as high quality as where it needed to be, wasn't as fast, there were bugs," he said.

Snap CEO Evan Spiegel knows just how much a buggy lower-quality app or feature can hurt usage. He saw engagement decline when the company rolled out a newly redesigned version of Snapchat. Now, his focus is on rebuilding the Android version of the app -- which is historically slow and buggy -- in order to bring its user experience up to par with iOS. Meanwhile, users have declined steadily since March.

Zuckerberg said he's happy with the recent progress of Facebook Stories. Investors should expect a continued shift from Feed-based sharing to sharing in Stories. That shift could accelerate into next year.

The real challenge is monetization

User adoption of Stories is well ahead of advertiser adoption. As a result, there's a gap in ad pricing between ads in Feeds and ads in Stories.

That gap showed up in CFO Dave Wehner's reported ad metrics. Average ad price increased just 7% year over year, while impression growth of 25% drove most of the company's overall revenue growth. That's a reversal of the trend we saw at the end of last year and the beginning of this year, when growth in average ad price outpaced impression growth.

It wouldn't be surprising if Facebook saw a decline in average ad price over the next few quarters as Stories ads become a bigger part of the business. That would come as the result of a continued acceleration in Facebook Stories users and the monetization of WhatsApp Status starting next year.

Zuckerberg said the transition could impede revenue growth over the next couple of years. He told analysts: "I want to be up front that even assuming that we get to where we want to go from a Feed-only world to a Feed-plus-Stories world, it will take some time, and our revenue growth may be slower during that period like it was while transitioning our products to mobile. From a business perspective, Feeds will drive the majority of our growth over the next couple of years at least until Stories become an even bigger driver."

Stories ads are an entirely different product from Feed ads, and Facebook and advertisers are still figuring out how users react to ads in the middle of Stories. As Facebook develops new ad products for Stories and advertisers develop new creatives, the gap between Feed ads and Stories ads should close.

Investors saw the same thing when Facebook transitioned from right-hand-column ads to News Feed ads. And it has developed best practices from that transition that it can use in the current transition, such as automatic placement (placing ads across all formats to optimize for an advertiser's goal). Wehner warned analysts that the transition will take years, not quarters, to get Stories monetized at the same level as Feeds.

But patient investors could see substantial benefits. "I'm optimistic that we'll get ads and Stories to perform as well as Feed over time," Zuckerberg said. "And that the opportunity will be even bigger, because it looks like Stories will be a bigger medium than Feed has been."