During its Oct. 30 product launch event, Apple (AAPL -1.69%) announced much-needed updates to two of its Mac product lines. The Mac mini, Apple's small, stand-alone desktop computer, hadn't seen a real upgrade since October 2014, and the company's MacBook Air -- its entry-level notebook computer line -- had been left virtually unchanged since March 2015, save for a modest bump in the specifications of the lowest-cost model..

Let's look at what Apple brought to the table with these upgrades and what they could ultimately mean for the company's Mac business. 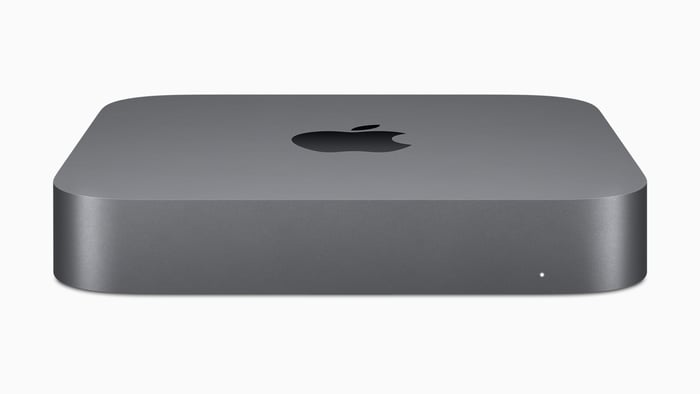 A breath of fresh air

Apple's latest MacBook Air enjoys a slew of upgrades. The casing design is new and quite a bit sleeker than the prior-generation model. It has a new display that's much sharper than the older one and, according to the company, supports "48 percent more color than the previous generation."

The display also uses IPS technology instead of the TN technology used in the last-generation MacBook Air display, translating into better viewing angles.

The company touted the solid state drives in the new MacBook Air, noting that they are "up to 60 percent faster than the previous generation" and come in sizes of up to 1.5 terabytes (TB), up from a maximum of 512 GB on the older models.

Apple also added its Touch ID fingerprint recognition technology, which the company had previously included on its higher-end MacBook Pro notebook line, a new keyboard, and a new Force Touch trackpad. The system also now supports Thunderbolt 3 connectivity, which is an upgrade from the Thunderbolt 2 that the older MacBook Airs supported.

The company also pointed out that the MacBook Air's speakers are "25 percent louder with two times more bass than on the previous generation for more dynamic range and fuller sound."

The overriding point is that the older MacBook Air had gotten quite stale, and these new systems seem to do a solid job of modernizing the lineup.

The new models are entirely different beasts. They utilize desktop-grade Intel eighth-generation Core processors "with quad- and 6-core processors," which allows the systems to offer "up to five times faster performance than the previous generation."

They can be configured with up to 64 GB of system RAM (up from a maximum of 16 GB in the prior models) and can contain as much as 2 TB of flash storage. The system, Apple says, is "packed with advanced ports including four Thunderbolt 3, two USB-A, HDMI video audio and Ethernet up to 10 [gigabits per second]."

The new Mac mini seems like a really nice product that should reinvigorate consumer interest in the line.

I see two potential impacts to Apple's Mac business from these products. The first is that Apple could see an improvement in unit shipments, as the new systems are far more compelling than their increasingly stale predecessors. Indeed, the systems could help Apple gain share in the personal computer market.

In addition to potential unit shipment acceleration, these systems could also help Apple drive Mac average selling prices up -- something the company has successfully achieved with its iPhone product line and looks set to do with its iPad line.

For some perspective, Apple's new MacBook Air starts at $1,199 and is available in configurations that are priced all the way to $2,599 for 16 GB of RAM and 1.5 TB of storage. Apple's previous MacBook Air, according to AppleInsider, topped out at $1,549.

Apple's new Mac mini starts at $799 and, maxed out, sells for $4,199. The old Mac mini started at $499, and although Apple's website for that product line is gone (so I can't tell you how much a maxed-out version of the older Mac mini costs), I'd imagine that the price ceiling for that product was considerably lower than $4,199.

Investors should definitely keep an eye on how Apple's Mac business performs in the coming quarters.