Please ensure Javascript is enabled for purposes of website accessibility
Log In Help Join The Motley Fool
Free Article Join Over 1 Million Premium Members And Get More In-Depth Stock Guidance and Research
By Ashraf Eassa – Nov 2, 2018 at 7:03AM

This chip is a total monster.

Apple (AAPL 2.56%) has an incredible internal chip-development organization, which designs the applications processors for core products such as the iPhone, iPad, and Apple Watch. The capabilities of these processors directly affect the user experiences that the company delivers, so it's important for it to continue to engineer cutting-edge chip technologies in support of these products.

Back in September, Apple introduced a trio of new iPhones, all of which are powered by the A12 Bionic chip. The chip incorporated improvements to CPU and graphics processing unit (GPU) performance, a dramatically faster Neural Engine for machine-learning calculations, and enhancements to the image signal processor, which helped Apple deliver a significantly better camera in these phones versus last year's iPhones. 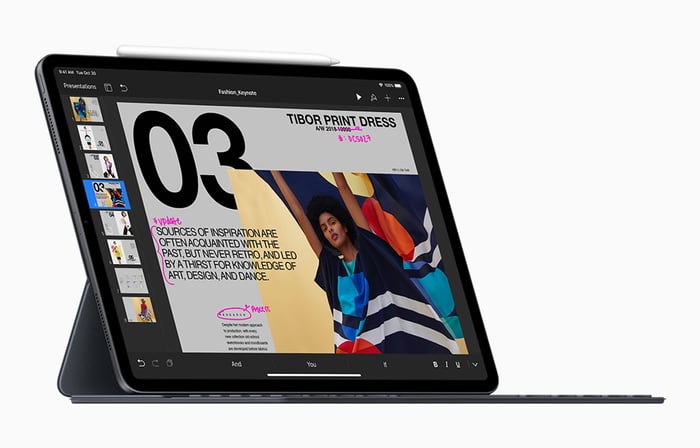 During its product launch on Oct. 30, Apple announced a pair of new iPad Pro tablets, replacing the aging models that it introduced in June of 2017. Inside those devices is a chip dubbed the A12X Bionic -- a beastlier version of the A12 Bionic found in this year's iPhones.

Here's what you need to know about it.

Since the A12X is designed specifically for larger devices with bigger batteries (meaning that it can be allowed to draw more power than a phone chip can), Apple has kept the number of efficiency cores at four, but it's doubled the number of performance cores inside.

Apple claims that the A12X Bionic can deliver "up to 35 percent faster single-core performance" and "an up to 90 percent boost during multithreaded tasks" compared with the A10X Fusion found in the company's prior-generation iPad Pro tablets.

The GPU in the A12X Bionic looks like it's based on the same fundamental design as the one in the A12 Bionic, but it sports seven cores instead of the four cores in the A12 Bionic -- something that's undoubtedly enabled by the greater thermal headroom that a tablet processor has versus a phone processor.

Some other cool stuff

Like the A12 Bionic, the A12X Bionic is manufactured using a 7-nanometer technology, which means that Taiwan Semiconductor Manufacturing Company is responsible for building it. The chip, Apple vice president of hardware engineering John Ternus observes, "has more than 10 billion transistors."

Ternus has also stated that the A12X Bionic-powered iPad Pro tablets "are faster than 92% of all the portable PCs sold in the last 12 months, including the most popular Core i7 models from the top manufacturers."

Core i7 is the chip giant Intel's highest-end mainstream notebook PC processor (although for high-power laptops, the company now offers a Core i9 chip, too).

"To put it another way, the iPad Pro delivers Xbox One S-class graphics performance in a product that's 94% smaller," Ternus said. "And there's no AC cord required."